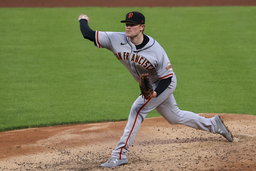 Webb (3-3) gave up six hits, struck out four and walked a batter before exiting with some shoulder soreness. The Reds left the bases loaded in the second inning, but Webb didn't allow a runner past second for the rest of his outing. He got 10 groundball outs, including two double plays.

"When I've good tempo and I'm throwing my sinker for strikes, I think that's a good recipe for success," he said.

Webb didn't come out for the seventh because of some shoulder soreness he said he's experienced before. He's not sure yet if or how much it will limit him going forward.

"I don't think there's much concern," he said. "We'll kind of see how it goes the next two days and go from there."

The Reds didn't help themselves defensively.

The Giants loaded the bases in the first inning against Sonny Gray (0-3) and pushed a run across when second baseman Jonathan India misplayed a potential inning-ending double-play ball.

In the Giants fourth, shortstop Eugenio Suarez misplayed a grounder that allowed Brandon Crawford to reach. Flores followed with his third home run of the season, a shot into the first row of the right-field stands.

"We had a bad day today," Suarez said. "Everybody knows. Everybody saw it. We are better than that."

Yastrzemski hit a 430-foot homer to right-center field with two outs in the fifth, and Dubon pushed it to 5-0 with a two-out solo shot in the sixth.

Jesse Winker had a run-scoring single for the Reds in the seventh. Nick Castellanos and Suarez hit back-to-back homers in the eighth.

In the Giants eighth, Flores cruised into second base with what appeared to be a stand-up double. But the Reds asked for a replay review, which showed that Flores lifted his foot slightly while India continued to hold the tag on him. He was called out.

Yastrzemski was held out of Saturday's game with side soreness after he ran into the scoreboard in Pittsburgh on Friday. He returned Sunday and hit a two-run homer, and then crushed one Monday, his sixth of the season.

"When it comes off of Yaz's bat, it's loud and it's fast," Giants manager Gabe Kapler said.

The Giants have homered in 14 consecutive road games dating to April 19. That ties the longest single-season streak in franchise history, which occurred in 1947 when the team was based in New York.

Seeking bullpen help, the Reds claimed right-hander Michael Feliz off waivers from the Pittsburgh Pirates. And they didn't waste any time getting him in there. He pitched the ninth inning and gave up a single before getting the Giants out in order.

Reds: 3B Mike Moustakas didn't start for the third straight game after suffering a heel contusion during the series in Colorado. He pinch-hit in the eighth inning, drawing a walk. Manager David Bell said he could return to the lineup as soon as Tuesday. Moustakas had been playing first base with Joey Votto sidelined by a fractured thumb.

Giants RHP Anthony DeSclafani makes his first appearance at Great American Ball Park on Tuesday since signing with San Francisco in the offseason. He spent five seasons with Cincinnati. The Reds will counter with right-hander Luis Castillo.