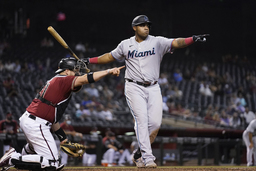 PHOENIX (AP) Cody Poteet earned a win on the mound in his major league debut, and one huge reason was a 277-pound man's ability to jump in a hurry.

Poteet pitched five solid innings, Jesus Aguilar homered for a third straight game and made a game-ending grab in the ninth, and the Miami Marlins edged the Arizona Diamondbacks 3-2 on Wednesday night.

It was a long road to the big leagues for Poteet, who spent more than six years in the Marlins' farm system before getting his promotion. He said there were some nerves in the first but it helped that Aguilar's two-run homer gave him a 2-0 cushion before he even threw a pitch.

"Amazing moment," Poteet said. "Lot of years of working for this, so extremely thankful."

The 26-year-old Poteet (1-0) gave up a run in the first inning and a solo homer in the fifth but was otherwise in control. The right-hander allowed just four hits, struck out six and didn't walk anyone.

"That was nice," Marlins manager Don Mattingly said. "I liked his tempo; he got (the ball) and was ready to throw but wasn't in a hurry. Threw strikes. He was good."

Aguilar gave the Marlins a 2-0 lead in the first when he turned on Matt Peacock's 93 mph fastball and launched the ball down the left-field line. It clanged off the foul pole about two-thirds of the way up.

Aguilar then made a spectacular defensive play that sealed the win. The 6-foot-3, 277-pound first baseman leapt in the air to catch a scorched line drive from Eduardo Escobar and stepped on the bag to double off speedy Tim Locastro for the game-ending double play.

"I don't know how high he got off the ground, but it was about 10 feet from our perspective on the bench," Mattingly said.

Aguilar was an All-Star in 2018 when he hit a career-high 35 homers for Milwaukee, but struggled in 2019. He bounced back with eight homers in the pandemic-shortened 2020 season and already has nine long balls through 34 games this year. His 31 RBIs lead the National League.

Miami's Adam Duvall and Jon Berti both had two hits. Sandy Leon hit a solo homer in the second.

Peacock (1-1) took the loss after giving up three runs, two earned, over five innings. It was the right-hander's first career start, which was needed because scheduled starter Zac Gallen was placed on the 10-day injured list on Wednesday.

"He met the expectation of what we thought he was capable of doing," Lovullo said. "I thought it was a solid day."

The Marlins wrapped up the game with four scoreless innings from their bullpen that included stints from Richard Bleier, Anthony Bass and Dylan Floro. Yimi Garcia pitched the ninth for his sixth save.

Poteet was the sixth Marlins player to make his major league debut this season.

Arizona's Andrew Young has four hits this season and all of them are homers. His solo shot as a pinch-hitter in the fifth inning Wednesday cut the Marlins' lead to 3-2.

There are only five players since 1974 who have matched that feat to start a season. The only one to beat it is Rob Deer, who had five homers for his first five hits while playing for the Tigers in 1992.

Marlins: 2B Isan Diaz was removed "as a precaution because he was feeling unwell and fatigued." The team added that Diaz was cleared by a physician after he left the game.

Diamondbacks: Put 1B Christian Walker (sore oblique) and Gallen (strained elbow) on the 10-day injured list. Arizona called up RHP Seth Frankoff and Young to take their places on the active roster.