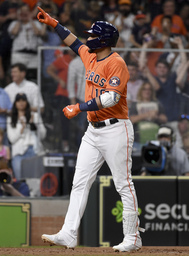 HOUSTON (AP) Yuli Gurriel homered and tied a career high with four hits while driving in four runs to lead the Houston Astros to a 10-4 win over the Toronto Blue Jays on Friday night.

Carlos Correa added a two-run homer and Jose Urquidy (3-2) pitched seven strong innings to help the Astros to their second consecutive victory after they lost their previous three games. Urquidy allowed four hits and two runs for his third straight win after opening the season by losing two decisions.

"He gave up the two home runs, but other than that he was masterful," Astros manager Dusty Baker said. "He had an outstanding changeup. He has been using his changeup more and that keeps them off his fastball."

Gurriel, who hit a two-run homer in the fifth, is having a great season and leads the Astros in hits (39) and RBIs (24).

"I'm having a lot of fun," Gurriel said in Spanish through a translator. "I'm just glad I'm helping the team win. To be able to do that makes me feel really good."

Bo Bichette put the Blue Jays up early with a solo homer to left field with one out in the first.

Gurriel singled to start Houston's second before Correa knocked a homer off the foul pole in left field to put the Astros up 2-1. The bases were loaded with two outs in the inning when Blue Jays starter Ross Stripling (0-2) walked Alex Bregman to make it 3-1.

"The one thing that he did he kept us in the game with no command," Toronto manager Charlie Montoyo said of Stripling. "We have to keep him in there because we don't have enough pitching to cover that many innings. He's got to give us more than that, but he deserves credit for keeping us in the game."

There was one out in the third when Danny Jansen connected off Urquidy on his second home run this season to cut the lead to 3-2.

The Astros were up by 3-2 with one out in the fifth when Gurriel hit his two-run shot off Tim Mayza.

Stripling allowed six hits and three runs in 3 2/3 innings to remain winless in four starts with the Blue Jays this season.

"These guys, they're really good," Stripling said. "They command the zone well and they made me work."

Gurriel, who also singled in the third, added an RBI single on a grounder in the seventh to push the lead to 6-2. Kyle Tucker's RBI double later in the inning left Houston up 7-2.

Gurriel drove in another run with a sacrifice fly in Houston's three-run eighth.

Teoscar Hernandez hit his third homer this season, a two-run shot that cut the lead to 10-4 in the ninth.

Blue Jays: Placed INF Joe Panik on the 10-day injured list with a strained left calf, retroactive to Thursday. 1B/DH Rowdy Tellez was recalled from Triple-A Buffalo to take his spot on the roster. ... Reliever Rafael Dolis left the game with right calf tightness and Montoyo said he will get an MRI on Saturday.

Astros: Ace Justin Verlander said he's progressing well in his recovery from Tommy John surgery in October, but it's too soon to set a timetable for his return. ... LHP Framber Valdez, who fractured his left ring finger on March 2, threw live batting practice Friday for the first time since his injury. Manager Dusty Baker is pleased with his progress, but said it will still be several weeks before he's ready to rejoin the team.

Toronto outfielder George Springer received a warm welcome in his first trip to Houston since signing with the Blue Jays this off-season. Springer was with the team on Friday despite being on the injured list with a strained right quad.

He was honored before the game with a highlight video from his time with the Astros. As it ended he emerged from the dugout and tipped his hat to acknowledge the fans as they gave him a standing ovation.

Springer was drafted by Houston in the first round in 2011 and spent the first seven years of his career with the team. He was named MVP of the 2017 World Series, won two Silver Slugger awards and was named to the All-Star team three times during his tenure with the Astros.