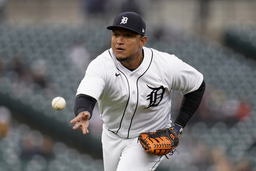 DETROIT (AP) Matt Shoemaker pitched five scoreless innings and Kyle Garlick, Jorge Polanco and Max Kepler homered to lift the Minnesota Twins to a 7-3 win over the Tigers on a rainy Friday night in Detroit.

The game was delayed by rain for 35 minutes in the middle of the fourth and for 69 at the start of the seventh. The second delay came shortly after Willi Castro hit a three-run homer in the sixth to cut Detroit's deficit to one, but Minnesota added three more runs after play resumed.

"I think we forced the Tigers' staff to work pretty hard tonight," Twins manager Rocco Baldelli said. "Our ability to go out there and put a few more runs on the board is what's going to lead to wins."

Miguel Cabrera had two hits for the Tigers, passing Babe Ruth on the career list.

Shoemaker (2-3) allowed four hits and two walks in five innings. He struck out five. The right-hander returned for one more inning after the first delay and qualified for the win as a result.

"We didn't know any time frame, but the assumption was, hey, if it's quick, we're going to be good to go," Shoemaker said.

Tarik Skubal (0-5) allowed solo homers by Garlick and Polanco, but that was the only scoring against him. He yielded four hits and two walks in five innings, striking out eight.

"I thought he responded to the early part of the game where he gave up a couple runs," Tigers manger A.J. Hinch said. "He kept going after it."

Detroit has lost eight of nine.

Garlick led off the game with a homer to right, and Polanco started the second with his own solo shot to make it 2-0.

"I think I was over 60 (pitches) after three innings or so," Skubal said. "Not where I want to be obviously."

Kepler added an RBI single in the sixth for Minnesota, and Andrelton Simmons followed with a run-scoring groundout.

Polanco hit an RBI double in the seventh, and Kepler went deep in the eighth to make it 6-3. Miguel Sano drove in a run in the ninth with a single.

Cabrera came into the game on an 0-for-27 skid, but his second-inning single tied him with Ruth for 45th with his 2,873rd hit. Detroit put its first two hitters on base in the second, fourth and sixth - Cabrera reached in all three of those innings - but only in the sixth did the Tigers finally score on Castro's drive to left-center.

Twins: C Mitch Garver left the game in the eighth as a precaution because of right shoulder inflammation. ... Minnesota put OF Byron Buxton on the 10-day injured list with a strained right hip. The Twins also selected the contract of OF Trevor Larnach from Triple-A St. Paul and designated LHP Brandon Waddell for assignment. ... Baldelli said INF/OF Luis Arraez (concussion) could be back when his seven days on the IL are up - or soon after that. He went on the IL on Tuesday.