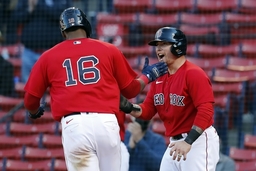 BOSTON (AP) Franchy Cordero woke up on Thursday in an 0-for-25 slump and he figured he'd end the day the same way. He wasn't in the lineup for Boston's series finale against Detroit.

Then Kike Hernandez came down with a tight hamstring in the first inning, and Cordero was suddenly in the game - in the No. 1 spot in the batting order. And it was a good thing for the Red Sox that he was.

Cordero had three hits, made a shoestring catch to end a Tigers threat and then brought home the game-winning run in the eighth with the help of Detroit's fourth error. After blowing three leads, the Red Sox held on to beat the Tigers 12-9.

"All of us that aren't in the lineup to start the game, we try to stay ready," said Cordero, who had one hit since April 14, dropping his batting average from .348 to .153. "We're working in the cages or trying to stay warm. I was happy I was able to contribute to the win."

One day after giving up three runs in the 10th, the Red Sox coughed up leads of 4-1, 5-4 and 8-7 before scoring four in the eighth to avoid losing the three-game series to the worst team in the majors.

"We know all about winning series. And yesterday it slipped away from us," said Red Sox shortstop Xander Bogaerts, who became the 30th player to appear in 1,000 games for the Red Sox - the 10th to do it before his 29th birthday. "It wasn't our prettiest game this year. But it was definitely one where we showed fight, showed grit."

The teams combined for six errors, three wild pitches, two hit batsmen, a passed ball and a balk. Of the 17 half-innings, only three went 1-2-3.

"It was amazing, right?" Red Sox manager Alex Cora said sarcastically. "But it was a big league win, and you've got to take them. We played some great games in New York, good pitching and defense. That wasn't pretty, but we'll take it."

Rafael Devers drove in three runs on a pair of singles. But the Red Sox third baseman also committed two errors - the second to allow the Tigers to tie the game 8-8 in the seventh.

Matt Andriese (1-1) earned the win despite allowing Detroit to take a 9-8 lead in the eighth; he gave up one run on three hits, a walk and a balk in one inning. Adam Ottavino pitched the ninth for his first save.

Kevin Plawecki walked, Christian Arroyo ran for him and Christian Vazquez pinch hit for Bobby Dalbec, who is in an 0-for-27 slump. Vazquez singled to tie it 9-all and then third baseman Jeimer Candalario botched Cordero's nubber down the third-base line, allowing the go-ahead run to score.

"He made contact when it matters at the end," Cora said. "He hustles all the time. He put pressure on their defense."

Alex Verdugo singled in two more runs to make it 12-9.

Candelario and Willi Castro had three hits piece for the Tigers.

Red Sox starter Nathan Eovaldi gave up six runs in 4 1/3 innings in his worst outing of the season. He was 7-2 with a 2.59 ERA in 10 starts dating to last August. Eovaldi still has not allowed a homer in 52 innings - the longest active streak in the majors and the only qualified pitcher who hasn't given up a homer in 2021.

Tigers: Wilson Ramos took a Devers foul tip off the inside of his left knee in the first inning. A trainer came out to look at him, but he remained in the game. Ramos left the game in the eighth with lower back tightness.

Red Sox: Hernandez left the game in the first inning with right hamstring tightness. He doubled to lead off the inning and took third on a groundout before Cordero came in to replace him there. In the fourth, Xander Bogaerts went to the ground after fouling a ball off his left leg. He remained in the game and hit the next pitch for a single.

Tigers: Host the Twins for the start of a three-game series. LHP Tarik Skubal (0-4) will face Minnesota's Matt Shoemaker (1-3).