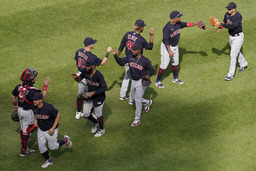 Zach Plesac and three relievers limited the White Sox to four hits as Cleveland took two of three in a series between AL Central foes that both made the playoffs last year. The Indians have won five of their last seven.

Andrew Vaughn had two hits for the White Sox, who had won seven of nine.

Ramirez hit a two-run shot - his eighth homer of the season - off Codi Heuer in a three-run seventh inning.

"He's one of the best players in the game," Indians manager Terry Francona said. "He's smart, he's got the talent. He's just a great player. I'm glad people are finally coming to realize that outside of Cleveland."

Hernandez connected for a solo drive off Lucas Giolito to put the Indians ahead in the third. Giolito has allowed six homers in six starts.

Rosario tripled and scored on third baseman Yoan Moncada's error when Moncada and shortstop Tim Anderson bumped into each other trying to field a popup in the fourth.

Plesac (2-3) allowed three hits and four walks while striking out six in 5 2/3 innings. He fanned Jake Lamb with the bases loaded in the third after issuing back-to-back walks and hitting Jose Abreu with a pitch.

Plesac also escaped trouble in the fourth when he struck out Anderson with two on. In two previous starts against Chicago, the right-hander had allowed 12 runs over 5 2/3 innings.

"I think it's just a matter of getting my rhythm and smoothness in my delivery a little more consistent and I'll be fine," Giolito said.

Star rookie Yermin Mercedes was scratched from the White Sox lineup after reporting late. Lamb replaced him at designated hitter. Mercedes entered Sunday second in the majors with a .395 batting average. Chicago manager Tony La Russa said he was not upset with Mercedes.

"It was explainable," La Russa said of Mercedes' lateness. "I knew when I wrote him in there and then we took him out, it was definitely not a fan-friendly decision. He's earned a lot of popularity."

Indians: C Roberto Perez sat out due to a small, nondisplaced fracture in his ring finger. He was injured when he got crossed up by RHP James Karinchak during the team's last visit to Chicago. Francona said he's hopeful Perez will return Monday. . Regular LF Eddie Rosario started at DH to help rest his legs, Francona said.

White Sox: CF Luis Robert (strained right hip flexor) will go on the injured list, La Russa said. Robert exited after beating out an infield single in the first inning. X-rays were negative, and he will be evaluated Monday. Adam Eaton replaced Robert as a pinch-runner and moved to right field, while Leury Garcia took over in center. Chicago is already without LF Eloy Jimenez, who is expected to miss five to six months after rupturing his left pectoral tendon trying to make a leaping grab during an exhibition game March 24 against Oakland. OF Adam Engel (strained right hamstring) also is on the injured list. OF Luis Gonzalez will likely join the roster from the alternate site, La Russa said. . RHP Dylan Cease will start Tuesday at Cincinnati instead of LHP Carlos Rodon (4-0, 0.72 ERA) to give Rodon extra rest. Rodon, who threw a no-hitter April 14 against Cleveland, underwent Tommy John surgery in 2019.

White Sox: After an off day Monday, Cease (1-0, 2.96) is expected to start Tuesday to begin a two-game interleague series at Cincinnati. RHP Jeff Hoffman (2-1, 3.33) will take the mound for the Reds.