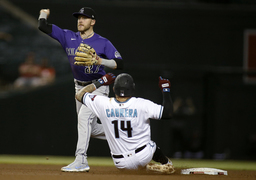 PHOENIX (AP) Madison Bumgarner followed his seven-inning no-hitter by allowing one run over five innings and sparked a four-run, third-inning rally with a single to lead the Arizona Diamondbacks over the Colorado Rockies 7-2 on Friday night.

Bumgarner (3-2) fell behind in the first inning when Trevor Story doubled on his 11th pitch and C.J. Cron followed with an RBI single.

The 31-year-old left-hander gave up only two more hits, both singles, in his final four innings and won his third straight start. He walked one and struck out six - including the side in the fifth - and left after 81 pitches.

"He made pitches and kept everything manageable," Arizona manager Torey Lovullo said of Bumgarner.

"He was under the weather a little bit. There was no potential for him to miss the start. I felt like he emptied his tank in the fifth inning. He's fine. He's going to be fine. We were a hundred percent certain it was a non-COVID situation."

Last Sunday, Bumgarner faced the minimum 21 batters - the only Braves runner who reached came on an error - in 7-0, seven-inning victory at Atlanta in the second game of a doubleheader.

The game didn't officially count as a no-no. Under a 1991 ruling by Major League Baseball's eight-man committee on statistical accuracy, a no-hitter is defined as a game of nine or more innings that ended with no hits.

"Honestly, I was pretty happy with the way it went," Bumgarner said. "Going into it I was a little nervous about how it was going to be. I've been kind of beat up, got some allergy stuff or whatever going around. It kind of took its toll."

MadBum has given up two runs in his last 17 innings over three starts.

"There is finish to his pitches," Lovullo said. "There is a lot of conviction, and he is landing them. Bum deserves all the credit. He goes out there and executes. He is starting to command the ball on both sides of the plate."

Josh Rojas homered for the second straight game and Asdrubal Cabrera had two hits and two RBIs for Arizona, which has won five of six and nine of 11.

Rojas homered in the eighth against Jordan Sheffield.

The Diamondbacks offered $14 tickets for the Friday and Saturday games to commemorate the 14 scoreless innings thrown by Bumgarner and Zac Gallen in Sunday's sweep.

Diamondbacks: OF/IF Ketel Marte (hamstring) went through running and hitting progressions and took batting practice Friday. "It's still going to be a little bit of time" before he returns, general manager Mike Hazen said. ... 1B Christian Walker (oblique) and OF Tim Locastro (finger) are expected to play in intrasquad games at the alternate site Saturday and could rejoin the team for a trip that begins Tuesday in Miami.