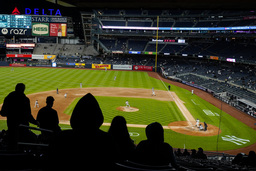 Judge hit a grand slam among a pair of homers to earn an early exit, Gerrit Cole struck out 12 and the New York Yankees routed the Detroit Tigers 10-0.

The frequently injured Judge was held out of New York's starting lineup in its previous two games with what the Yankees have described vaguely as "lower body soreness." Manager Aaron Boone has declined to elaborate, although he's eager to get Judge off his feet when he can - akin to the load management practice that's become common in the NBA.

Judge admitted he and Boone have butted heads over his playing time - "I obviously want to be in there," he said - but he acknowledged that it was a good idea to squash his lower body issue with rest before it became something bigger.

"I think the results speak for itself," he said.

Whatever his ailment, Judge found his footing against the last-place Tigers with a leadoff homer in the third and a slam to the second deck in right field in the fourth. He was replaced on defense with New York up 10-0 in the sixth.

Clint Frazier, Aaron Hicks and Rougned Odor also homered on a cool and windy night, and Giancarlo Stanton had rips of 115 mph and 114 mph among his three hits in a breakout slugfest for the slow-starting Yankees. The Yankees set highs for runs, hits (15) and homers (five), opening a season-high nine-game homestand with their third win in four games and improving to 12-14.

Stanton had three hits for the third straight game for the first time in his career. He's been in a groove since moving up to the No. 2 spot in the order, with Judge now behind him.

"Those guys, obviously they're special players, special talents in the box," Boone said. "Feel like if we can get a full season out of both of those guys, they can do really special things in the middle of our lineup."

New York pitchers had 18 strikeouts to tie a franchise record for a nine-inning game, last achieved against Toronto on Sept. 29, 2017.

Tarik Skubal (0-4) allowed four runs in three innings for the Tigers before the bullpen surrendered five runs in the fourth.

Detroit didn't arrive at its New York hotel until around 4:15 a.m. after being swept in a doubleheader Thursday by the Chicago White Sox. With the majors' lowest team batting average (now .199) and highest strikeout rate, the Tigers never had a chance against Cole, finishing with four hits.

"I think we have to be realistic with where we're at," manager A.J. Hinch said. "We're not doing enough positive things right now to feel good about anything."

New York's ace struck out at least 10 without issuing a walk for the third straight start, a feat only previously accomplished by Clayton Kershaw (twice) and Chris Archer, per MLB.com. It was the fourth time this year Cole reached double-digit Ks without a walk, matching Mike Mussina in 2001 for most such games by a Yankee in one season.

"I came out with a goal to try to settle in a bit earlier this year, and I think I'm on the right track to do that," Cole said.

Judge's slam was the second of his career and first since May 28, 2017. Despite dealing with side and lower body soreness, he leads the club with seven homers.

Hicks' homer in the third ended an 0-for-18 slide. He followed with an RBI double in the fourth.

Hinch made his first visit to Yankee Stadium since the 2019 AL Championship Series, when his Houston Astros beat New York in six games. Hinch was asked during that series about suspicions the Astros were stealing signs.

"I think it's kind of funny," he said at the time.

A month later, The Athletic reported that Houston stole signs en route to its 2017 World Series championship, prompting an MLB investigation that led to Hinch's firing.

Hinch expected to be booed loudly during pregame introductions, but few in the limited-capacity crowd were in their seats when Hinch's name was announced, so there wasn't much of a reaction. Not that he's uncertain about their feelings.

"I'm well aware I'm not the most-liked person in New York," he said.

The Yankees and Tigers are among four MLB teams that have cleared the league's 85% threshold of fully vaccinated players, coaches and others with Tier 1 access, allowing them to ease some health and safety protocols, including wearing masks in the dugout. This was the first game between teams who have both reached the threshold.

Tigers: Detroit doesn't expect LHP Matt Boyd to miss significant time after he was pulled from a start Tuesday with left knee tendonitis. He was sent for testing Friday, and while the club was awaiting a full diagnosis. Hinch believed Boyd would miss his next start but could return the next time through the rotation. ... LHP Daniel Norris cut his hand while throwing a pitch but remained in the game. Hinch said it's a recurring but not concerning issue for Norris, and he remained in the game.

Yankees: 1B Luke Voit (left knee surgery) took at-bats Thursday at the club's alternate training site and hopes to play in minor league games next week. Boone hopes Voit could join the club when it starts a trip at Tampa Bay on May 11.

Yankees RHP Jameson Taillon (0-2, 6.23) starts against Detroit RHP Spencer Turnbull (1-1, 3.27). Taillon was charged with four runs in four innings in his previous start against Cleveland, but he also has a sharp 21-to-2 strikeout-to-walk ratio over 17 2/3 innings.