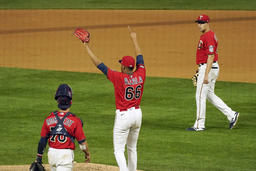 MINNEAPOLIS (AP) Alex Kirilloff hit the first two home runs of his major league career, including a three-run drive that broke open the game in the third inning and led the Minnesota Twins over the AL Central-leading Kansas City Royals 9-1 on Friday night.

Kirilloff, who debuted last Sept. 30, hit his first home run in his 28th plate appearance, an opposite-field drive to left off reliever Tyler Zuber that put the Twins ahead 4-0 and set off fireworks at Target Field.

The 23-year-old hit a solo homer to center off Ervin Santana in the fifth inning. Kirilloff entered hitting .115 (3 for 26) in eight games since he was recalled on April 23.

"It's definitely relieving to see some go over the fence," Kirilloff said.

Kirilloff became the first Twins player to hit his first two home runs in the same game since Pat Meares on June 19, 1994.

Kirilloff's teammates noted after the game that they rarely see the rookie smile. Even after his two homers, it took some work in the dugout to get him to show some emotion.

"Andrelton suggested tickling," Twins manager Rocco Baldelli said after listening to shortstop Adrelton Simmons. "No one knows how to really get to him or how to make him laugh or smile yet."

Michael Pineda (2-1) allowed one run and three hits in five innings. The right-hander was hit on his throwing arm by Michael A. Taylor's grounder in the the fifth but finished the inning.

"Mike threw the ball well," Baldelli said. "He probably would have had an opportunity to pitch a little longer, too, if not for the comebacker."

Brady Singer (1-3) left after he was hit on the left foot by a Josh Donaldson line drive that ended the second inning. The ball ricocheted to Carlos Santana, and the first baseman stepped on the base to double up Ben Rortvedt, who had just walked in the first plate appearance of his major league debut.

Singer remained on the ground for a minute before walking off under his own power.

Royals manager Mike Matheny said after the game that X-rays on Singer's heel were negative.

"It hit him in the heel and really hit a nerve more than it really hit anything else," Matheny said. "All things considered, I think we're very fortunate."

Rortvedt, a 23-year-old catcher, was 1 for 3 with a bloop RBI double in the eighth against Wade Davis, then scored on a wild pitch.

Carlos Santana hit a solo homer in the fourth inning, his sixth of the season.

"The walks are going to kill us," Matheny said.

Royals: Singer was diagnosed with a bruised heel and listed as day to day.

Twins: Outfielders Max Kepler and Kyle Garlick were both activated from the COVID-19 injured list after missing nine games. Kepler started in right field and was 0 for 3 with a walk.

Twins: RHP Matt Shoemaker (1-2, 5.49 ERA) will make his fifth start of the season. He has lost two straight starts and is winless in three.