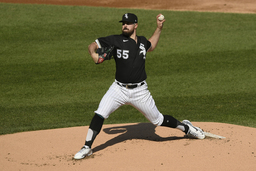 CHICAGO (AP) Carlos Rodon struck out a career-high 12 in six innings and the Chicago White Sox beat Detroit 3-1 Thursday in a doubleheader opener, the Tigers' 11th loss in 13 games.

Rodon (4-0) made his first home start since pitching a no-hitter against Cleveland on April 14. He allowed two hits and walked one, and his ERA rose from 0.48 to 0.72.

Rodon gave up a run in the fourth, just his second earned run allowed this season, when Robbie Grossman singled leading off, stole second and came home on Jonathan Schoop's two-out double.

Rodon struck out seven of his first nine batters, including five straight. He has 30 strikeouts in 25 innings this season.

"I consider myself a rhythm guy on the mound, and when I get in a groove I feel a lot better," said Rodon, who finished April holding opposing batters to a .085 average (7 for 82). "Right now we're just doing it right, I guess."

Liam Hendriks got three straight outs for his fifth save in seven chances, finishing the opening game of a doubleheader of seven-inning games under pandemic rules. The doubleheader was caused by a rainout Wednesday.

Chicago has won five of six.

Chicago's first three batters reached on the fifth on a single and two walks. Billy Hamilton hit a tying groundout, and Leury Garcia hit the next pitch for a two-run single.

In the second game, right-hander Dylan Cease (0-0) was to start for the White Sox against left-hander Matthew Boyd (2-2).

Tigers: JaCoby Jones slammed into the center-field wall after catching Adam Eaton's first-inning drive but remained in the game.

White Sox: OF Luis Robert was recalled from the COVID-19 injured list before the game and LHP Garrett Crochet (upper back strain) was placed on 10-day injured list, a move retroactive to Monday. Robert, who did not play in the first game, had reported flu-like symptoms Monday.