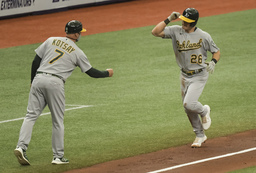 Shane McClanahan, a Tampa Bay left-hander starting on the day after his 24th birthday, made an unusual regular-season debut, becoming the fourth player to appear in the regular season after first playing in the postseason.

Throwing at up to 100.5 mph, he was given a 1-0 lead when Austin Meadows hit an RBI double in the first off Chris Bassitt.

Ramon Laureano's run-scoring double tied the score in the third, and Chapman put Oakland ahead 2-1 in the fourth with his fourth homer this season.

"I've had some good swings this year but I feel like I haven't been able to repeat them," said Chapman, who raised his average from .169 to .184. "To put two at-bats together like that felt good."

Brandon Lowe tied the score an inning later with his fourth homer.

Jed Lowrie walked off Diego Castillo (0-2) with one out in the ninth, Sean Murphy flied out and Chapman doubled over the glove of right fielder Brett Phillips, who tried for a leaping catch at the front of the warning track.

Jake Diekman (1-0) pitched a perfect eighth, and Lou Trivino finished for his fourth save in four chances. Phillips singled with two outs in the ninth, and Kevin Kiermaier took a full-count changeup for a game-ending called third strike.

The teams combined for only 17 runs in splitting the four-game series.

"We got the big hits when we needed to win a game," A's manager Bob Melvin said. "To be able to scratch out some wins when you're not swinging well means you're a pretty good team."

McClanahan made his first appearance last Oct. 5 in the Division Series against the Yankees and got into four postseason games, including World Series Game 3. He joined Oakland infielder Mark Kiger (2006), Kansas City infielder Adalberto Mondesi (2015) and Minnesota outfielder Alex Kirilloff (last Sept. 30) as playing in the postseason before the regular season.

McClanahan gave up two runs and five hits in four innings, struck out five and walked none, throwing 42 of 59 pitches for strikes.

"I made some good pitches, made some mistakes. It's a good starting point to work from," he said. "The thing that sticks out was the home run. I made a mistake, caught too much plate. He's a great hitter and he made me pay for the mistake."

McClanahan struck out four of his first five batters, including Mark Canha leading off the game with his fastest pitch. McClanahan threw 24 fastballs and 24 sliders, mixing in 11 changeups.

"Feels like Glasnow all over again," Melvin said, a reference to Rays ace Tyler Glasnow. "He's going to be pretty good."

Laureano's double was Oakland's third straight hit off McClanahan. Phillips threw out Tony Kemp at the plate trying to score on a hit by Canha.

Athletics: 1B Matt Olson did not play after getting hit near the eye by a ball that ricocheted off a screen during batting practice. The A's had not determined whether to put Olson on the injured list. "Depends on when the eye decides to open up," remarked Chapman. "That thing is sealed shut right now."

Rays: 1B-OF Yoshi Tsutsugo was placed on the COVID-19 related injured list after experiencing side effects from a vaccination.

With Mike Fiers starting Friday night after spending a month on the injured list with a lumbar strain, the A's will be using a six-man rotation until further notice. "It makes more sense right now," said Melvin. "We'll re-evaluate after everyone pitches, but it's always nice to get the other starters an extra day."

Athletics: RHP Mike Fiers will get his first start of the season Friday night as the A's open a three-game series at Baltimore.

Rays: LHP Ryan Yarbrough (1-2) will either start or follow an opener Friday night in the first game of a three-game series against Houston at Tropicana Field.