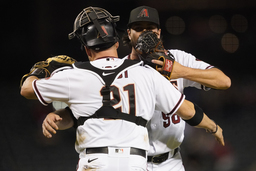 PHOENIX (AP) Caleb Smith doesn't mind admitting he was angry at being pulled from Arizona's starting rotation after one ineffective start at the beginning of the season. In fact, he still is.

But instead of moping, he got better. Now he's among the reasons the Diamondbacks are suddenly playing good baseball.

Smith was one of five Arizona relievers who threw a scoreless inning on Thursday night, which allowed Arizona time to rally for a 5-3 win over the Colorado Rockies. After a 5-10 start to the season, the D-backs are now 13-12.

"Anything they want me to do, I'll do," Smith said. "And I'll do it with a smile - well maybe not a smile on my face - but to the best of my ability. And I won't complain about it."

The Rockies built a 3-0 lead by the third inning after Charlie Blackmon, Trevor Story and Ryan McMahon all had run-scoring hits. But the Diamondbacks responded with a run in the third and two more in the fourth to tie the game. Josh Rojas' solo homer to right field - his second of the season - cut the D-backs' deficit to 3-2.

Arizona's decisive rally came in the seventh when Eduardo Escobar tripled into the right-center gap, scoring Josh VanMeter. David Peralta followed with a single that brought home Escobar, and the D-backs had their final 5-3 margin.

"These guys came out on the attack," Arizona manager Torey Lovullo said. "I could feel it in the dugout."

Smith stuck out the side in the seventh. He had about as good of an inning as a reliever can have: 13 pitches, nine swinging strikes, three strikeouts and a zero on the scoreboard. The left-hander said he watched some tape from his more successful 2019 season that gave him a few hints on how to improve his performance.

Smith said that while he was mad about the decision to move him to the bullpen, he also understood. He didn't throw the ball particularly well during spring training and gave up four runs in three innings during his only start.

"If you take it negatively and mope around, you're not any help to the team," Smith said.

Since his move to the bullpen, Smith has given up just one run over 12 2/3 innings while striking out 16. Crichton earned his third save.

Colorado's Robert Stephenson (0-1) took the loss, giving up two runs, including one earned, in the seventh. Arizona finished with 12 hits.

"You saw the Diamondbacks throw five guys and they each put up a zero," Rockies manager Bud Black said. "We threw three guys, Stephenson got nicked, and that's the ball game."

The Rockies selected the contract of veteran first baseman Matt Adams from the team's alternate training site. The 32-year-old was signed by Colorado in late March. He's a career .259 hitter with 118 homers and 397 RBIs in stints with St. Louis, Washington and Atlanta.

To make room on the roster, the Rockies optioned outfielder Sam Hilliard to their alternate training site. They also designated right-hander Ashton Goudeau for assignment. Goudeau was claimed off waivers by the Rockies in April from the Los Angeles Dodgers.

Adams came into the game as a pinch hitter in the ninth but struck out looking to end the game.

Diamondbacks: Devenski (restricted list) was added back to the roster after three outings at the alternate site. Devenski left the team shortly after opening day because of personal issues. He gave up two runs over two innings in his first two outings of the season before his absence. ... The team optioned RHP Yoan Lopez to the alternate site to make room for Devenski. Lopez had a 6.30 ERA in 11 appearances.

The Rockies and Diamondbacks meet for the second game of the four-game series on Friday night. Colorado will send RHP Jon Gray (3-1, 2.54 ERA) to the mound. He'll face Arizona LHP Madison Bumgarner (2-2, 6.31), who is making his first appearance since throwing a seven-inning no-hitter against the Braves on Sunday.