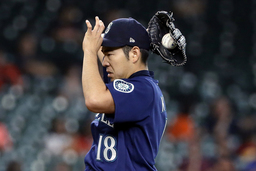 HOUSTON (AP) Yusei Kikuchi took a no-hit bid into the the seventh inning, and Taylor Trammell homered and made a sliding game-ending catch, leading the Seattle Mariners over the Houston Astros 1-0 on Thursday to avoid a four-game series sweep.

Kikuchi (1-1) did not allow a hit until Carlos Correa doubled to deep right-center field with one out in the seventh.

"It was a full count so I decided to go and try to challenge him there," Kikuchi said through a translator. "I thought a walk would be about the worst thing I could do there so I wanted to be aggressive."

"I go into every start with the mentality of trying not to allow the opposing team a single hit," Kikuchi said. "Since it was a close ballgame, that really allowed me to get focused and locked in today."

That was the only hit allowed by Kikuchi, who pitched seven innings, struck out seven and walked two, throwing 61 of 95 pitches for strikes. Kikuchi walked Alex Bregman in the first and Myles Straw in the third inning, then retired 11 in a row.

"Awesome outing by Yusei Kikuchi," Mariners manager Scott Servais said. "Can't say enough about his competitiveness -- that's what really stood out to me. It doesn't get any bigger than that to shut that team down and take a no-hitter into the seventh inning against one of the best lineups in the American League."

Servais said in his first two seasons with Seattle, Kikuchi at times was stoic. But on Thursday, Kikuchi was occasionally mildly animated.

"He's wearing his emotions on his sleeve a little bit more, and I'm a big fan of it," Servais said. "I think it's important to just be who you are, and the results will be better."

Anthony Misiewicz pitched a perfect eighth, and Kendall Graveman a one-hit ninth for his third save, completing a two-hitter.

Trammell hit his fourth home run of the season in the third inning, a ball that appeared to graze the glove of a leaping Chas McCormick at the right-field wall.

With one on and two outs in the ninth, Correa lofted a fly 248 feet to center. Trammell sprinted and made a sliding catch.

to center field, and Trammell got a jump that briefly made Servais very antsy.

"I think the ball was over second base, and I looked at Taylor and he hadn't moved yet," Servais said. "So, he had to put on the afterburners to get there, but he made a great recovery and a great catch."

Houston starter Luis Garcia (0-3) allowed three hits and struck out six in five innings. The Astros bullpen held Seattle scoreless in four innings and has allowed just one run in its last 14 innings.

Mariners: LHP Marco Gonzales was placed on the 10-day injured list with a left forearm strain and is expected to miss a couple starts, manager Scott Servais said. Gonzales had an MRI on Wednesday. RHP Domingo Tapia was added to the active roster from the taxi squad. . LF Mitch Haniger (undisclosed) missed a second straight game. Servais said he wanted to play but held him out as a precaution. CF Kyle Lewis (rest) was also out of the lineup.

Astros: DH Yordan Alvarez (health and safety protocols) could be available for Houston's weekend series in Tampa, manager Dusty Baker said, adding that Alvarez is still taking more tests and is not 100% yet. He was placed on the injured list on Wednesday.

Mariners: RHP Chris Flexen (2-1, 2.74 ERA) will start for Seattle on Friday night when the Mariners host the Angels.

Astros: RHP Lance McCullers Jr. (1-1, 4.58 ERA) will pitch in his hometown for the first time since 2018 as Houston starts a three-game series at Tampa Bay on Friday.