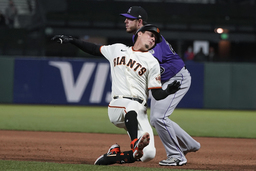 Tauchman, acquired from the Yankees on Tuesday, started in center field and went 3 for 4 with a run and an RBI. A backup in New York's star-studded outfield, the 30-year-old Tauchman is hoping to establish himself as an everyday player.

"He was exactly as advertised," Giants manager Gabe Kapler said. "Comfortable in the outfield. In the batter's box, he's a fighter. Very competitive."

Brandon Belt added a two-run single for the Giants, who improved to 16-9 and remained tied with the Los Angeles Dodgers for the best record in the NL West.

Yonathan Daza had an RBI single in Colorado's two-run seventh, when the Rockies pulled within 4-2. But they fell to an NL-worst 9-15 and are 1-8 on the road.

San Francisco has won eight of its past 11. The rotation has keyed the Giants' surprising start - their starting pitching leads the majors with a 2.20 ERA.

Wood, signed to a one-year deal in the offseason, has a 1.50 ERA and had the Rockies flailing at his sharp slider all night. He didn't allow a baserunner until walking Charlie Blackmon in the fifth.

When Garrett Hampson doubled to right with two outs in the sixth, it ended a string of 11 2/3 hitless innings for Wood dating back to his previous start.

"I feel really good right now," Wood said. "I feel like I'm dialed in, and I had all three (pitches) working tonight. Just commanding the ball well right now."

The Giants took the lead with four runs in the second inning. They got an assist from German Marquez (1-2), who walked in the first two runs and then allowed Belt's two-run single.

"He did put up three zeros (but) he threw 90 pitches in four innings," Rockies manager Bud Black said. "It wasn't by German's standards a good game . but he'll be ready for his next start."

It was 4-1 when Camilo Doval relieved Wood with the bases loaded and no outs in the seventh, and Doval coaxed a 4-6-3 double play from Colorado's Josh Fuentes. After walking Elias Diaz, Doval stranded a runner at third by retiring pinch-hitter Raimel Tapia on a comebacker.

The Giants broke the game open with a three-run seventh.

It was a quiet night offensively for Colorado, but the Rockies did get an RBI double from catcher Elias Diaz in the ninth. Diaz came in 1 for 18 over his previous seven games.

The Giants placed OF Mike Yastrzemski on the 10-day IL (retroactive to Monday) with a strained left oblique and recalled lefty reliever Sam Selman.

They also optioned RHP Gregory Santos to make room for Tauchman on the roster. Tauchman was acquired for left-hander Wandy Peralta and a player to be named.

Giants: RHP Reyes Moronta, working to come off the injured list healing from a strained elbow, could be activated as soon as the team's upcoming road trip, but the Giants still want to see how he comes out of a simulated game.

The Giants are off Thursday and begin a three-game series at San Diego on Friday, with Kevin Gausman (1-0, 2.14) starting. The Rockies will send Antonio Senzatela (1-3, 5.76) to the hill Thursday night in the opener of a four-game series at Arizona.