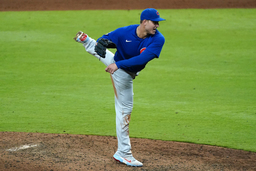 Ynoa added his first career homer in the fourth as Atlanta shut out the Cubs for the second straight night. Chicago has lost five in a row.

Freddie Freeman went 4 for 5 and hit his seventh homer in the sixth.

The Braves' bats have woken up since they scuffled for just one hit while getting swept by Arizona in a doubleheader last Sunday.

"We knew it was going to turn," Freeman said. "We know what kind of offense we have. It's the same team we had from last year. We put up some pretty impressive numbers. It's only a matter of time. We've been hitting balls hard. They've just been getting caught."

In the first, Freeman singled before Ozuna's second homer sailed 453 feet into the seats in left-center. Ozzie Albies followed with a double, and Austin Riley hit his third homer over the left-field fence.

Atlanta went up 6-0 in the second when Ynoa and Ronald Acuna Jr. singled and scored on Freeman's double. Acuna scored on a headfirst slide after hesitating at third on the relay throw.

Hendricks has given up seven first-inning homers, the second most of any season in his career. He allowed 10 homers in the first inning of 2018 - in 33 starts. He surrendered a career-high four homers in the first against the Braves during a 13-4 loss on April 17 at Wrigley Field and is 0-3 with a 12.00 ERA with nine homers allowed in his last three starts against Atlanta.

"He's been encouraged and we've been encouraged by the bullpen work," Cubs manager David Ross said of Hendricks. "It's just not translating to the game right now. He'll go to work as he always does. There's definitely frustration that he's going through right now because he's putting in a lot of work and still trying to figure that out."

Ynoa (2-1) gave up four hits and two walks with nine strikeouts. He pitched around Jake Marisnick's triple in the second and singles by Anthony Rizzo and Matt Duffy in the third. He left in the sixth after giving up a walk to Duffy and a single to Kris Bryant.

"As he's growing up and figuring some things out, I love that he threw some changeups tonight," Atlanta manager Brian Snitker said. "He had a strikeout on one of them. That's going to be huge. It's a cool thing when we bring a kid up and he starts to mature and figure things out. He's a young pitcher that's got some really good skills and a good arm."

The Braves led 8-0 in the fifth on Guillermo Heredia's RBI double. Albies homered in the sixth to make it 10-0.

Rizzo made his second career appearance on the mound, getting two outs in the seventh, including a strikeout of Freeman. Duffy, the starting third baseman, recorded the final out. Infielder Eric Sogard pitched the eighth.

Cubs: SS Javier Baez, on the mend with left hamstring tightness, took grounders and batting practice before the game. Ross said there's a chance he could play Thursday. ... LF Joc Pederson, on the injured list with left wrist tendinitis, is taking batting practice at the team's alternate training site in South Bend, Indiana. ... C Austin Romine had an MRI that showed a significant tear in his left wrist. He has no timetable for a return.

Braves: RHP Mike Soroka (right shoulder inflammation) started playing catch Tuesday, but still has no timetable to resume full baseball activities. Soroka's 2020 season ended because of a torn Achilles tendon, and he was mostly held out of spring training. His shoulder flared up earlier this month. The second half of June appears to be the earliest he could return. ... LHP Max Fried (right hamstring strain) will face hitters on Thursday and is close to returning from the injured list. ... RHP Chris Martin (right shoulder inflammation) will throw a couple of simulated games at the alternate training site in Gwinnett.

The Braves will allow 100% capacity at Truist Park beginning May 7 against Philadelphia. Protective measures will stay in place that include wearing a mask unless actively eating or drinking.