Buxton gets 5 hits, Twins homer 6 times in rout of Indians 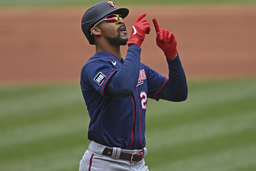 CLEVELAND (AP) As Byron Buxton walked to the plate for his final at-bat, he didn't consider hitting for the cycle until a fan pointed out the obvious.

"I heard this little kid and he's like, `All you need is a triple,'" said Buxton, who settled for his second double.

It's the only time he came up short Wednesday.

Buxton homered on Logan Allen's second pitch and went 5 for 5, Mitch Garver hit two homers and the struggling Twins connected six times to end a four-game losing streak with a 10-2 thumping of the Cleveland Indians.

Buxton's AL-leading eighth homer triggered a three-homer barrage in the first off Allen (1-4), who allowed six home runs in a 12-batter span over two starts and soon will be on his way to Triple-A Columbus.

Buxton added two doubles, two singles and stole a base while pushing his average to .438.

"Leave it up to Buck to get the team going," Garver said. "He's been playing out of his mind right now. We follow his lead when he sets the pace for a game. He's got to be like the most electric baseball player in the game right now.

"He's certainly the hottest. Everything is going his way. "

Not long after Buxton returned to the dugout in the first, Josh Donaldson hit a 425-foot homer. Allen walked Nelson Cruz and surrendered Jorge Polanco's 426-foot homer into the left-field bleachers as the Twins took extended batting practice to open a 4-0 lead after 14 pitches.

"It was awesome," Garver said of the early onslaught as Minnesota became the first visiting team to hit six home runs in one game at Progressive Field, which opened in 1994.

J.A. Happ (2-0) took advantage of all the run support. The left-hander, who carried a no-hitter into the eighth inning against Pittsburgh in his previous start, didn't have to be nearly as good and allowed two runs and four hits in seven innings.

Garver, among several Twins struggling at the plate in the season's first month, connected for a solo homer in the fifth and added a two-run rocket in the seventh off rookie Sam Hentges.

Williams Astudiollo also homered as Minnesota salvaged the finale of the three-game series and won for just the second time in 10 games.

Amed Rosario homered for the Indians, who went 3-5 in their homestand against the White Sox, Yankees and Twins.

Buxton came in batting .390, so Twins manager Rocco Baldelli moved him into the leadoff spot for the second time this season.

The hunch paid off immediately as Buxton's third career leadoff homer set the tone for the Twins, who connected for 1,201 feet of homers in the first off Allen.

Buxton leads the league in several offensive categories, but never considered one of them might be home runs. He laughed when asked if he would consider an invite to the All-Star Game's Home Run Derby later this season in Denver.

"You ever see how big them dudes is in that?" he said.

Allen, who was rocked last week in a start against New York, got a sarcastic Bronx cheer from Indians fans when he finally threw a strike and again when recording an out. He was mercifully pulled in the second and will now go to the minors to work on his game.

"I'm not worried," Allen said. "I'm upset I let my teammates down and I'm upset that the last three outings have come to this, but it's part of it. I just have to go down there and attack and when I come back, hopefully we don't have these tough conversations."

Unable to find good spots for Oliver Perez to pitch, the Indians designated the 39-year-old left-hander for assignment.

"It was having a tough time figuring out how to use him," manager Terry Francona said. "He was kind of pitching in games that were spread out, which doesn't kind of fit the role for a lefty specialist. I told him last night, `Man, I haven't figured it out.'"

Perez was re-signed this winter after spending the past three seasons with Cleveland.

Nick Wittgren returned to the club after being placed on paternity leave.

Twins: Minnesota will have Thursday off before beginning a three-game home series on Friday against Kansas City with Michael Pineda starting. The Royals haven't announced their starter.