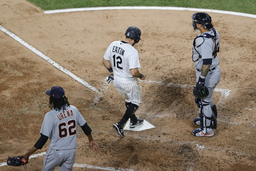 Owners of the worst record in the majors, the Tigers matched their highest error total since they committed five against the White Sox in Chicago on Aug. 31, 2014. Third baseman Jeimer Candelario allowed a run to score in the first when he missed a throw and helped bring home another in the third with a throwing error as Chicago grabbed a 2-1 lead. But despite the struggles on defense, Detroit opened a nine-game trip on a winning note after losing 10 of 11.

"Our mentality has been pretty good," manager A.J. Hinch said. "It's been frustrating. You try to just kind of stay in the moment. We talked today before the game about not dragging that mess of a homestand into this road trip; it doesn't have anything to do with today's game. It's easier said than done some days, but we weren't down. It wasn't a quiet dugout. It hasn't been."

Cabrera hit a long solo drive in the first for his 489th home run. Goodrum put the Tigers on top 4-2 in the seventh with a two-run shot against Lucas Giolito (1-2) after Wilson Ramos lined a tying double on the previous pitch. Jonathan Schoop made it 5-2 in the eighth when he went deep against Matt Foster.

Urena (1-3) earned his first win since he beat San Diego with the Miami Marlins on June 1, 2019. The right-hander pitched seven innings for the third straight start, giving up two runs - one earned - and seven hits.

Jose Cisnero struck out Billy Hamilton and Leury Garcia with two on to end the eighth. Gregory Soto worked the ninth for his third save and Detroit stopped a nine-game losing streak against Chicago.

The White Sox placed outfielder Luis Robert on the injured list as a precaution after he reported feeling flu-like symptoms, then saw their season-high four-game win streak end. They were 0 for 13 with runners in scoring position and grounded into four double plays.

Giolito, who threw 114 pitches, acknowledged he "didn't have much left in the tank" in the seventh. Even so, he said it was his job to get through the inning.

Manager Tony La Russa took the blame for not recognizing Giolito was running on empty. He was confident his ace could get out of the inning even after Detroit tied it.

"Is that what he said?" La Russa asked when told about Giolito's comment. "Then, it's my fault for not recognizing it."

White Sox: GM Rick Hahn said in a statement that Robert informed the team's medical staff of his symptoms Monday night and the club was awaiting further test results. "Our hope is that his symptoms resolve quickly and that the testing protocols clear him to return to the active roster soon," Hahn said. ... RHP Lance Lynn (strained right trapezius) is scheduled to start Saturday against Cleveland, La Russa said. Lynn has not pitched since April 15.