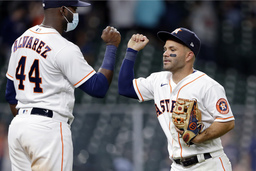 HOUSTON (AP) Jose Altuve had three hits and two RBIs in his return after testing positive for COVID-19, leading the Houston Astros to a 5-2 win over the Seattle Mariners on Monday night.

"It looked like he had never left," Houston manager Dusty Baker said. "Life sure is a lot better with Altuve back, period - in the lineup and the clubhouse."

Yordan Alvarez and Yuli Gurriel both had three hits and drove in a run as the Astros won for the fourth time in five games after losing their previous three.

Jose Urquidy (1-2) yielded five hits and two runs in six innings for his first win of the season. Ryan Pressly allowed one hit in a scoreless ninth for his second save.

The Mariners got solo homers from Kyle Lewis and Kyle Seager but went 0 for 4 with runners in scoring position as they lost their second straight game. They won two of three in Seattle earlier this month when the Astros were without five players, including Altuve, Alvarez and Alex Bregman, because of health and safety protocols.

"You're not going to have all three of your plus pitches every time," Mariners manager Scott Servais said. "There were a couple of sliders that just didn't have that finish to it, that bite. Not quite as sharp as he has been in the past."

Altuve, the 2017 AL MVP, was among five Astros who were placed on the COVID-19 list on April 14. The other four returned within days, but Altuve missed 10 games before being activated on Monday. He cleared health and safety protocols Friday and revealed Saturday that he had tested positive for COVID-19 but did not have any symptoms.

"I was really happy to be back and a little nervous my first at-bat," he said. "But all in all I feel pretty good and I'm happy that we won this game."

Altuve wasted no time getting to work in his return, hitting a leadoff single before stealing his first base of the season with two outs in the first. The Astros took a 1-0 lead when he scored on a double by Alvarez. Gurriel followed with a single to score Alvarez and put Houston up 2-0.

There were two outs in the third when Lewis connected on his first home run of the season to cut the lead to one. The shot to straightaway center field by the 2020 AL Rookie of the Year traveled 428 feet.

With two outs and two on in the fourth inning, Altuve came through again, lining a single to left field to score two and extend the lead to 4-1.

He attributed his success after his absence to studying Houston's games every day.

"I was watching every single game, every single pitch and sometimes just sitting out watching can help you to think about your approach and what you want to do when you come back," he said.

The Astros had runners on first and second with one out when a fielding error by Seager at third base on a grounder hit by Carlos Correa helped load the bases. Houston made it 5-1 on a sacrifice fly by Kyle Tucker.

Seager opened the sixth with a home run to the bullpen in right-center to get the Mariners to 5-2.

Mariners: LHP Nick Margevicius was placed on the 10-day injured list with inflammation in his left shoulder. He had an MRI, but Servais did not yet have the results Monday. The team recalled RHP Robert Dugger from the alternate training site to take Margevicius' spot on the roster.

Astros: RHP Jake Odorizzi was placed on the 10-day injured list with a strained muscle in his right arm. Odorizzi left his start Saturday after just five pitches with what the team called tightness in his right forearm, and Baker announced Monday that Odorizzi had a strained right pronator.

It was the 1,903rd career victory for Baker in his 24 seasons as a major league manager, breaking a tie with Gene Mauch for 13th place. The 71-year-old Baker is the only skipper to lead five different franchises to the playoffs.