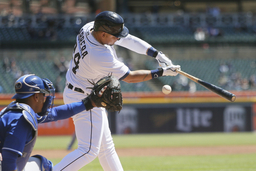 A day after the Royals prevailed 2-1 in a game that took 2 hours, 10 minutes, Duffy (3-1) allowed four hits while striking out eight. He's allowed one earned run in 23 innings so far this season.

"It has been fun to be effective. I've been really inconsistent the last few years," Duffy said. "I think what I'm doing right now is just throwing everything with just maximum intent."

Hunter Dozier hit a solo homer for the AL Central-leading Royals, who have won four straight. Kansas City has allowed only three runs through the first three games of this series.

"I think it's every part of the game. It starts with our starting pitching. Our guys are giving us a chance," Royals manager Mike Matheny said. "To have a good run of wins in this league, you have to have a little bit of everything, and I think we've had that."

Detroit starter Michael Fulmer yielded one hit in three scoreless innings, but reliever Tarik Skubal (0-3) gave up runs in the fifth and sixth. The Tigers have lost nine of 10.

Michael A. Taylor singled to lead off the fifth and went to second on a sacrifice bunt. He then stole third and came home on a bloop single by Whit Merrifield.

"From a stuff and pitch-execution standpoint, I thought I did pretty well today," Skubal said. "I don't think the results match how I felt. I'm not really too concerned about the results. There's growth in everything."

Dozier homered an inning later to make it 2-0. Carlos Santana added a two-run single in the ninth.

Merrifield had two of Kansas City's four stolen bases on the day.

The Royals clinched their first series victory at Comerica Park since Sept. 4-6, 2017, and they have now won a four-game series at Detroit for the first time since June 16-19, 2014.

Tigers: C Wilson Ramos appeared to have an issue with his right hand after a wild pitch in the sixth, but he remained in the game. ... 1B Miguel Cabrera (left biceps strain) was reinstated from the injured list. He went 0 for 4 with three strikeouts and made an error in the field. Hinch said Cabrera would have a couple scheduled off days on the team's upcoming road trip.

The Tigers send Spencer Turnbull (1-0) to the mound for Monday's series finale against Kansas City's Brad Keller (1-2). Keller retired just five of the 13 batters he faced in his most recent start Tuesday.