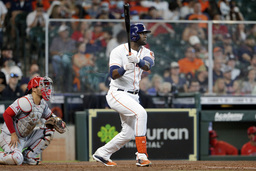 HOUSTON (AP) Kent Emanuel had just sat down in the bullpen and was preparing to enjoy a leisurely cup of coffee during the first inning on Saturday.

After toiling in the minors for seven long seasons, the Houston Astros pitcher was thrown into his major league debut at a moment's notice.

And what a moment it was.

"It's pretty wild," Emanuel said. "But I've been expecting this moment for quite some time now. So, I was ready."

"Sometimes it's better that a young man in his first outing doesn't have to sleep on it or think about it and you just give him the ball," manager Dusty Baker said.

Emanuel likely would have made the roster out of spring training but was finishing an 80-game suspension for performance-enhancing drugs.

Emanuel, who was recalled from the alternate training site on Friday, has loudly proclaimed his innocence since the suspension and crusaded against what he calls unfair testing policies. He chose to wear the jersey No. 0 for the number of games he believes he should have been suspended.

Alex Bregman hit a three-run homer, Yordan Alvarez had a season-high four RBIs, Carlos Correa had three hits including a homer and Michael Brantley doubled three times for Houston. The Astros had season highs in runs and hits (18) to win their third straight following a three-game skid.

Odorizzi exited with tightness in his right forearm after retiring leadoff batter David Fletcher on five pitches. Emanuel completed the scoreless frame and then Correa, batting leadoff for the third straight game, homered to key a three-run first for Houston.

The Angels got solo homers from Albert Pujols in the second and Shohei Ohtani in the third. Bregman padded the lead when he sent a slider from Griffin Canning (1-2) to make it 6-2 in the third.

Emanuel settled down after the home run to Ohtani, retiring 10 in a row.

"At first I think he was a little bit overamped and throwing a lot of fastballs," Baker said. "Then (catcher) Jason (Castro) and him settled down and he started using all his pitches."

"We had to scramble," he said. "We were pretty left-handed in some spots. You just don't know who you are facing. We'd never seen him before. That's one of those unknown situations and he had pretty good stuff. There's a lot to like. He's pretty good."

A two-run single by Yuli Gurriel capped a four-run fourth that made it 10-2. Alvarez cleared the bases with a triple in the fifth, and Baker took out Brantley and Bregman for the sixth with the game well in hand.

It was the fourth straight loss for the Angels, who have dropped 17 of their last 20 in Houston dating to Sept. 1, 2018. They played without superstar Mike Trout, who missed a second straight game with a bruised left elbow after being hit by a pitch on Thursday night.

"Just walked by a garbage can and it's already in there," a disgusted Maddon said.

Odorizzi, who signed with the Astros on March 8, grimaced on his final pitch. Catcher Jason Castro went to check on him and quickly motioned to the dugout. Baker and trainers talked to Odorizzi for a couple of minutes before he was taken out of the game.

Canning yielded six hits and a season-high six runs while walking two in 2 1/3 innings, his shortest start this year.

Ohtani wasn't sure the ball was out on his homer, so he sprinted until he rounded third base before slowing down a bit for his waltz home.

He was greeted in the dugout with a high-five from Trout. The home run was Ohtani's sixth of the season, tying him with the three-time AL MVP and several other players for second most in the AL.

Angels: Maddon doesn't believe Trout's injury will land him on the injured list, but he isn't sure when he'll return. "It's all been kind of a day to day thing until that swelling really dissipates and he feels comfortable swinging the bat again," Maddon said.

Astros: 2B Jose Altuve revealed Saturday that he tested positive for COVID-19. He has been out since April 14 and it could be a few more days before he's ready to return to the lineup. Altuve said he did not have symptoms. ... Baker said Odorizzi would be further evaluated on Saturday or Sunday.

OHTANI IN THE OUTFIELD

Ohtani, a designated hitter and part-time pitcher, made his first career appearance in the outfield. He took over in left when the Angels had left fielder Anthony Bemboom pitch in the eighth inning.

"That was an emergency but I can see him anywhere on the field," Maddon said. "The guy is such a great athlete."