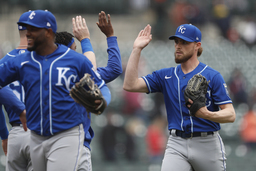 DETROIT (AP) Brady Singer took the mound in the bottom of the first and struck out the side.

The Kansas City right-hander already looked like he was in a nice rhythm - and the way Detroit's Matthew Boyd matched him, this turned into a quick afternoon at the ballpark.

Singer pitched seven impressive innings, and the Royals took advantage of some defensive sloppiness by the Tigers in a 2-1 victory Saturday. The game was over in 2 hours, 10 minutes - the shortest nine-inning contest in the major leagues this year - although Singer was apparently too focused to notice.

"I had no idea how quick the game was," he said.

Willi Castro homered for Detroit in the fifth, but that wasn't enough to overcome Kansas City's two runs in the top of that inning. Singer (1-2) allowed three hits and struck out eight.

Scott Barlow worked the eighth, and Josh Staumont pitched a perfect ninth for his first career save.

The shortest previous nine-inning game this season, according to the Stathead tool at Baseball-Reference.com, was actually the previous night, when Minnesota blanked Pittsburgh 2-0 in 2:17.

"You see the pace that was played today," Tigers manager A.J. Hinch said. "Both pitchers had great pace, and that comes with the catchers knowing what to call and having the pitcher in rhythm."

Boyd (2-2) was on the wrong end of this pitcher's duel, allowing one earned run and three hits in eight innings. It was the fourth straight quality start for the left-hander.

The Tigers have lost eight of nine.

"We're better than how we've played, and we're getting it handed to us pretty often right now," Hinch said. "Our guys are pretty frustrated."

The Royals did not have a baserunner until Jorge Soler doubled to lead off the fifth. With men on first and third and one out, Andrew Benintendi hit a grounder to first. Jonathan Schoop threw to second for the force, but his throw was a bit high and took away any chance of a double play. Soler scored to make it 1-0.

Michael A. Taylor followed with a single to right, and Victor Reyes threw to third to try to catch Benintendi. The ball bounced past third for an error on Reyes, and Boyd wasn't in position to back up the throw. The unearned run that came home on that play was ultimately the difference in the game.

"I think it's just us figuring out ways to win," Royals manager Mike Matheny said. "Today it was pressure on the bases, in my opinion caused some things to happen."

Kansas City went down 1-2-3 in every other inning but the fifth.

The Royals took Singer with the 18th pick in the 2018 draft. That was the same year the Tigers selected Casey Mize at No. 1. Mize lost Friday night's game to Kansas City.

Singer is 3-0 with a 1.44 ERA in four career starts against Detroit.

"He's done it to us a few times now," Boyd said. "He's a good pitcher. Any time you're able to couple being able to put the ball on the ground, as well as getting strikeouts, that's why he was a first-rounder a couple years back."

Royals: RHP Greg Holland was reinstated from the injured list, and RHP Brad Brach was designated for assignment.

Tigers: Announced after the game that DH Miguel Cabrera (left biceps) will be reinstated from the injured list prior to Sunday's game. The Tigers optioned INF Zack Short to the alternate training site.

The Royals send Danny Duffy (2-1) to the mound Sunday against Detroit's Michael Fulmer (1-1).