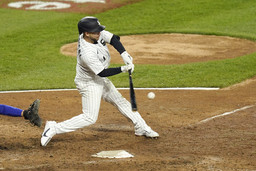 CHICAGO (AP) Nick Madrigal doubled home the winning run in the ninth inning after Liam Hendriks allowed a tying homer in the top half, and the Chicago White Sox recovered to beat the Texas Rangers 2-1 on Saturday night.

Luis Robert led off the White Sox ninth with an infield single and advanced on Yasmani Grandal's sacrifice. Rookie phenom Yermin Mercedes was intentionally walked before Madrigal delivered the winning hit to right field off John King with two outs.

"This game more than anything else is putting the ball in play," Chicago manager Tony La Russa said. "Just like Robert did to start there. What a great at-bat by him. He's got no fear. He loves those situations."

Willie Calhoun hit his first homer of the season off Hendriks (1-0) to right-center to tie the game. It was Hendriks' second blown save in six chances with his new team. He got the final five outs the previous night.

"He had good stuff," La Russa said. "He got the outs. Calhoun just tomahawked that ball. It's why it's the big leagues."

Yoan Moncada had three hits for Chicago and scored on Kyle Gibson's wild pitch in the sixth to break a scoreless tie.

"The one pitch that's frustrating is obviously that changeup that I spiked," Gibson said.

Dallas Keuchel threw six shutout innings for the White Sox, who have won five of six. They moved above .500 for the first time this season on Friday.

Calhoun had two hits for the Rangers, who have lost three of four. Texas went 1 for 7 with runners in scoring position.

The Rangers nearly tied the game in the seventh on Nick Solak's single with two on. Billy Hamilton, a defensive replacement in left field to start the inning, threw out Calhoun attempting to score from second.

"It was the one pitch I think King left up the whole time," manager Chris Woodward said of Madrigal's double.

Keuchel allowed seven hits and no walks, struck out two and pitched more than five innings for the first time this season.

Gibson struck out five and permitted six hits in six innings. His scoreless streak of 19 innings matched the longest in the majors this season. He has allowed three runs - two earned - in his last 27 innings.

"They pitched well, but I thought we actually played a better game," Woodward said.

White Sox RHP Lucas Giolito (1-1, 5.79 ERA) will be pushed back from his scheduled start Sunday against the Rangers due to a cut on his middle finger. He was injured trying to open a bottle.

"I thought that a glass water bottle I had was twist off, and it wasn't twist off," he said.

Giolito will start Tuesday against Detroit. He allowed eight runs - seven earned - in a career-low one inning Monday against Boston.

White Sox: RHP Lance Lynn (strained right trapezius) said he expects to return from the 10-day injured list Friday against Cleveland. He has been sidelined since April 18.

RHP Kohei Arihara (2-1, 2.21 ERA) is scheduled to pitch Sunday's series finale for Texas against RHP Michael Kopech (1-0, 1.69), who will make his second start of the season in place of Giolito. Arihara has won his last two starts and thrown 12 1/3 straight scoreless innings.