Bogaerts blasts one out of Fenway, BoSox hold on to beat M's 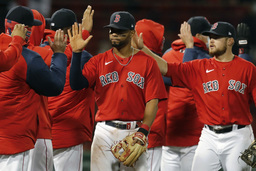 BOSTON (AP) Xander Bogaerts hit a two-run homer all the way out of Fenway Park and added an RBI single as the Boston Red Sox beat the Seattle Mariners 6-5 on Friday night.

J.D. Martinez also homered for the Red Sox, who survived a late scare when Kyle Seager hit a three-run homer in the ninth to pull Seattle within a run.

One night after rallying with a four-run 10th inning for a 7-4 victory, Seattle couldn't quite pull off another comeback. Matt Barnes, who gave up Seager's drive deep to right, got Evan White to line out to Bogaerts and end it.

"That was a grind. We'll take it. We're not going to complain about wins, but we had to grind that one out," Boston manager Alex Cora said.

The Red Sox, who had won every game they led before Thursday night, finished with 11 hits and have had 10 or more hits in 11 of 22 games this season.

Yusei Kikuchi (0-1) allowed five runs in 4 2/3 innings for Seattle, which never recovered after Bogaerts' drive onto Landsdowne Street in the first put Boston up 2-1. Bogaerts said he wasn't sure how well the ball would carry on a crisp, windy evening.

"I knew I got it good, but I was kind of a little doubting about the wind and the cold, so I ran out of the box pretty hard, but it went far," he said.

Martinez added a solo shot in the third to put Boston up 3-1 and had a great opportunity in the fifth with the bases loaded and nobody out, but grounded into a double play. Bogaerts followed with a single that put the Red Sox up 5-2 and that was all for Kikuchi.

"Kikuchi just wasn't quite on his game like we saw him earlier in the season," Seattle manager Scott Servais said. "I thought he hung in there. He battled, trying to keep it close."

Bogaerts' 121st career homer tied him with John Valentin for fourth most by a Red Sox shortstop. Rico Petrocelli tops that list with 210, followed by Nomar Garciaparra (178) and Vern Stephens (122).

"He's such a strong guy and he can get to whatever," Cora said. "That was a great game by him today."

The Mariners were looking for their eighth comeback victory in 20 games this season. Seattle entered Friday with a 6-3 record in one-run games and nearly took another one from Boston.

"We do not quit, do we? We keep playing. We put a little run on them at the end," Servais said.

Mariners: 2B Shed Long Jr. had a setback in his recovery from offseason surgery to repair a fracture in his right shin, Servais said. Long has been shut down from participating in games at the Mariners' spring training complex in Arizona due to continued issues with the leg. "He was picking up his running and playing in more competitive games and stuff like that had to get shut down," Servais said. "He's still not 100 percent healthy yet so we wanted him to be 100 percent before we start sending him out there and expecting him to go back-to-back days and really picking up his workload."