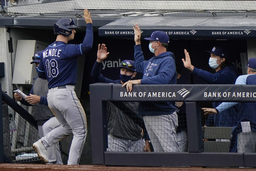 NEW YORK (AP) Gerrit Cole shook his head, disgusted. Aaron Hicks put hands on hips and bowed his head. By the end of the afternoon, pretty much all of the New York Yankees were appalled, along with their loudly booing fans.

Yoshi Tsutsugo hit a tiebreaking double off Cole in the seventh inning that lifted the Tampa Bay Rays to a 4-2 win Sunday and a three-game sweep that extended the Yankees' losing streak to five games. New York fell to an AL-worst 5-10, its poorest start since 1997.

Opener Andrew Kittredge, Ryan Yarbrough (1-2), Diego Castillo and Jeffrey Springs (first big league save) combined on the Rays' second three-hitter of a series in which New York managed 11 hits in all. Tampa Bay outscored the Yankees 17-7, and New York pushed across just three runs other than on homers.

"We got great players in that room," Yankees manager Aaron Boone insisted. "They do know that at their core, obviously, we're getting punched in the mouth right now."

Cole (2-1) was hurt by slipshod defense that made three mistakes in the Rays' two-run third inning alone, two by Hicks in center and one by Clint Frazier in left. One of the three runs off Cole was unearned, giving the Yankees a major league-high.

Joey Wendle added a ninth-inning homer off Darren O'Day, prompting boos from the crowd of 10,606, who saved their loudest jeers for the final out.

New York has lost five straight for the first time since Sept. 4-8, getting outscored 30-14.

"You have to strap your boots on and wade through the mud a little bit," Cole said. "If we stay in that mindset and we leave the field every day exhausted, good things are on the horizon, but I don't have the magic wand. I don't know when it's going to turn."

Aaron Judge struck out three times and is 4 for his last 28, Hicks has 1 hit in his last 15 at-bats, Gleyber Torres 3 in his last 24, and Giancarlo Stanton, despite a second-inning home run, is 3 for his last 26. Frazier is 1 for his last 24 and does not have an RBI in 40 plate appearances this season.

New York's batting average is down to .210, one point above AL-worst Cleveland.

Boone said his hitters have to guard against "being obsessed with chasing a result, which is hard to do when you get off to a slow start individually. You want to get a hit so bad that that can sometimes work against you."

Yarbrough allowed one run and two hits in five innings, and the Rays beat the Yankees for the 18th time in 23 meetings, including in last year's Division Series. Tampa Bay swept a series for the second time in its last three visits to Yankee Stadium after sweeping just two of their previous 51 series of three games or more in the Bronx.

"It's just not an easy thing to do. It doesn't happen very often," Rays manager Kevin Cash said. "So you've got to enjoy it when it does."

Cole retired 13 in a row before Wendle singled with one out in the seventh. Tsutsugo, his average down to .146, followed by driving a changeup to right-center for an RBI double and a 3-2 lead.

Tampa Bay had gone ahead 2-1 in the third after Mike Zunino's leadoff single. Hicks got a late break on Kevin Kiermaier's bloop to short center, then bobbled the ball and lost a chance for a forceout at second. Yandy Diaz followed with an RBI single as Hicks allowed the ball to kick off his glove for an error that let Kiermaier take third.

LeMahieu hit a tying single in the fifth, when Yarbrough struck out Judge with two on and two out. Tampa Bay, off to a slow start in the defense of its AL pennant, got back to .500 at 8-8.

"We just wanted to kind of get back on track," Yarbrough said.

Cole struck out 10 in 6 1/3 innings and with 39 strikeouts set a Yankees mark for most in his first four starts, with three more than Masahiro Tanaka in 2014.

Rays: RHP Collin McHugh (low back strain) was put on the 10-day IL and RHP Chris Mazza was recalled from the taxi squad.

Yankees: 1B Luke Voit (knee surgery March 29) is to start swinging a bat Tuesday. ... RHP Domingo German will be recalled from the alternate training site this week.

Rays: LHP Josh Fleming starts Monday at Kansas City. Fleming is from Bridgeton, Missouri, and is expecting about 12 family members and 25 friends, many of whom have not seen him pitch since 2018 at Bowling Green. "Any time I hear screaming, I'll know it's going to be from there," he said. Fleming's parents, who will be on hand, were forced by the pandemic to watch his debut on television at a hotel across from Tropicana Field but did attend World Series games.