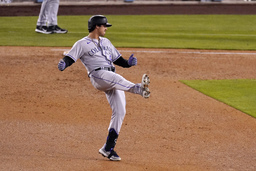 LOS ANGELES (AP) Justin Turner utterly destroyed a plate of nachos and splattered a fan's jacket with cheese when the veteran slugger's home run ball landed in the first row at Dodger Stadium.

When Turner got back to the dugout and saw the replay, he hailed a clubhouse attendant and bought a fresh order of nachos for the fan. The Dodgers also helped out by sending a World Series hoodie.

"I felt bad," Turner said with a grin. "I'm sure it was not a cheap plate of nachos."

Bleacher shenanigans aside, there's nothing cheesy about the sublime way the Los Angeles Dodgers are playing as they begin defense of their championship.

Luke Raley got his first career hit in the eighth inning for the major league-leading Dodgers, who have won 10 of 11 while remaining unbeaten in their past 11 games at Dodger Stadium since last Sept. 23. Turner hit his third homer of the season in the third, and McKinstry connected leading off the eighth for the third homer of his impressive April.

Every portion of the Dodgers' roster is having big moments these days: Although the Rockies snapped their 26-inning scoreless streak and made it a one-run game in the fifth, Colorado couldn't score in the final four innings against Los Angeles' bullpen.

Victor Gonzalez escaped a jam in the fifth after the Rockies chased Dustin May. Corey Knebel (1-0) retired the side on six pitches in the eighth, and Kenley Jansen got three strikeouts for his third save.

"Watching these guys is fun," said Jansen, the dominant closer who looks like his vintage self again after an inconsistent 2020. "For me, to just have the confidence back and the feeling back, it's even more fun. It's going to be fun from now to keep playing this season and try to win another championship."

C.J. Cron slowed his slump with two hits for the Rockies, who lost their fifth straight despite scoring their first run since last Saturday on Trevor Story's RBI single in the fifth.

Colorado manager Bud Black was ejected in the third inning for arguing with plate umpire Phil Cuzzi from the dugout after a few close ball-strike calls went against the Rockies early. Black's team surged to a fifth-inning rally, but then regressed back to the struggling side that's 3-9 to start the season.

"Clearly Buddy was unhappy with a couple of those calls, and it's hard to see from the side, but you guys saw the video," Rockies bench coach Mike Redmond said. "It looked like those calls were close. They weren't going our way, and Buddy got his point out there and made his point. We right now are just in one of those spots where we're not getting those calls, and then we're not taking advantage of those opportunities."

Jon Gray (1-1) yielded five hits and three runs in a four-inning start for the Rockies after taking a no-hitter into the seventh inning of his last outing.

The Dodgers went up 2-0 while forcing Gray to throw 36 pitches in the first. Mookie Betts singled and scored on Turner's single before Corey Seager came home on Gavin Lux's sacrifice fly.

"Things just didn't click early enough for me," Gray said. "I think I made the right adjustment. I just made it too late in the first, and that's what kept me from going five or six."

May yielded seven hits while pitching on eight days' rest for the Dodgers, throwing four scoreless innings before getting into big trouble in the fifth by giving up three singles and a walk along with his first two earned runs of the season.

Turner's homer was challenged by the Rockies, who thought the fan might have reached onto the field to make the catch, but video review confirmed the nachos were sacrificed for a noble cause.

Dodgers: OF Cody Bellinger still isn't running at full speed and has swelling in his injured calf. The 2019 NL MVP might not be ready to play when he's eligible to come off the injured list this weekend, manager Dave Roberts said.

World Series star Julio Urias (2-0, 2.84 ERA) faces Colorado for the second time already this season after giving up 10 hits on opening day in Denver. The Rockies send out Austin Gomber (0-2, 2.89) for the series finale.