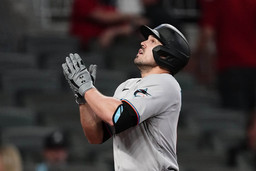 ATLANTA (AP) Adam Duvall drove in seven runs against his former Atlanta teammates with four hits, including two home runs, and the Miami Marlins beat Max Fried and the Braves 14-8 on Tuesday night.

Duvall's two-run double during a four-run fourth inning gave Miami the lead. He hit his first homer of the game in the third inning and added a three-run shot in the seventh. He has three homers in the first two games of the series, giving him four for the season.

Duvall tied a Marlins record, becoming the sixth player to drive in seven. He raised his batting average to .267 following a slow start.

"This game is funny," Duvall said. "It's just a matter of time. If you keep going out there, keep working, keep swinging, things happen. ... I felt like I was in control at the plate. It's a good feeling."

The Marlins signed Duvall to a $5 million, one-year deal after he hit five homers in nine games for Atlanta against Miami last season. Now he's proving he can produce on the other side of the NL East rivalry.

"I felt a little amped up playing against guys I played with for a while," Duvall said. "I have nothing but respect for those guys over there."

"We kept putting runs on the board and that's what we want to do," said Miguel Rojas, who had three hits.

Added Miami manager Don Mattingly: "It was one of those nights where everything kind of went our way,"

"It's just something he's going to have to work through," Braves manager Brian Snitker said. "... I just think he needs to be aggressive and trust his stuff."

Marcell Ozuna hit a two-run homer off Pablo Lopez, and Ozzie Albies added another homer to give Atlanta a 3-0 lead in the first inning.

The Marlins tied it in the second and took the lead with a four-run rally in the fourth that broke a 4-4 tie. With two outs, Fried hit Starling Marte and Garrett Cooper with pitches to help load the bases before Duvall's double to the leftcfield wall drove in two.

Duvall was popular in Atlanta but Snitker said it wasn't easy to see his former player have a big night against the Braves.

"Excruciating is what it was like," Snitker said. "I wish he'd done it against somebody else."

Anderson, who drove in three on three hits, capped the big inning with a two-run single to center field.

Marlins: Miami C Jorge Alfaro returned after he was held out on Monday due to lingering hamstring tightness.

Braves: Snitker said CF Cristian Pache will be placed on the injured list after leaving the game with left groin tightness in the fifth inning. ... Fried said he had a precautionary MRI on his right hamstring after feeling discomfort running the bases following his double in the fourth. He said he didn't have results of the test. ... Snitker indicated Riley, who entered the game in the sixth, would return to the lineup on Wednesday night.

Snitker juggled his lineup. Albies moved down three spots to hit fifth. Freddie Freeman hit second, where he spent most of the 2020 season, instead of third. Also, Ehire Adrianza started at third base for Austin Riley.

The Braves began the day hitting only .206 and were 1 for 11 with runners in scoring position in Monday night's 5-3 loss to the Marlins in 10 innings.

The new lineup clicked in the first inning off Lopez. Freeman's first double of the season, to the wall in left-center, was followed by Ozuna's first homer to center field. Albies' homer into the right-field seats pushed the lead to 3-0.

The Braves loaded the bases against right-hander Paul Campbell with one out in the ninth. Campbell struck out Dansby Swanson before Duvall missed pinch-hitter Alex Jackson's fly ball to shallow left field for an error as two runs scored. Richard Bleier, Miami's seventh pitcher, ended the game on Ender Inciarte's grounder to second base.

Braves RHP Charlie Morton (1-1, 3.27) will face RHP Nick Neidert (0-0, 2.08) in the third game of the four-game series on Wednesday night. Neidert, an Atlanta native, will make his first start against the Braves. He pitched two scoreless innings in relief at Atlanta on Sept. 23, 2020.