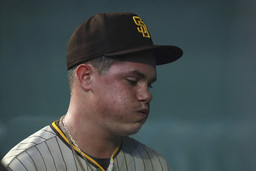 Grisham pulled a 1-0 fastball into the right-field stands off Mike Foltynewicz (0-2), who had retired the first nine batters. Machado hammered a 2-2 changeup off Ian Kennedy deep down the left-field line leading off the ninth.

"The way we pitched and played defense, we battled at the plate, got the big one from Grish, and then it's so nice to get that extra add-on," Padres manager Jayce Tingler said. "Just a great team win."

The 22-year-old Morejon retired the first two batters and walked Joey Gallo before departing with an elbow/forearm strain. He will be re-evaluated on Monday.

Stammen (1-1) took over and pitched through the fourth inning, his longest appearance since May 2017. The 37-year-old struck out three and allowed only a second-inning single to Jose Trevino on a ball that third baseman Ha-Seong Kim bobbled.

Taylor Williams, Tim Hill, Austin Adams, Emilio Pagan and Mark Melancon followed Stammen as the Padres held Texas to five hits, three walks and two hit batters while striking out 10. Melancon is 5 for 5 in save opportunities this season.

The Padres' sweep began with Joe Musgrove's no-hitter on Friday night and ended with another shutout. San Diego's bullpen came into the game with a majors-best 1.04 ERA, but the Padres didn't have long man Ryan Weathers or Drew Pomeranz available Sunday.

"This bullpen's special," Stammen said. "We've got some studs down there. I was just happy to do my part for once because I've been the only one giving up runs."

The Rangers left 10 runners on, including two each in the sixth and seventh and the bases loaded in the eighth trailing by one run. Pagan struck out pinch-hitter Ronald Guzman looking on a 2-2 fastball to end the eighth.

"The seventh inning, the eighth inning, obviously, when we loaded the bases, but I was more disappointed in the first five or six innings," Texas manager Chris Woodward said. "We didn't do anything. We were chasing. We were expanding the strike zone. We did everything that we don't want to do."

Foltynewicz became the first Texas starter this season to pitch into the seventh. He finished the inning and allowed one run on two hits and three walks.

MACHADO GETS THE LAST WORD

Machado went down looking twice Sunday, one day after being ejected following a called third strike, before homering in the ninth.

"Obviously, you can't even show your emotions, either, without getting tossed," Machado said. "I don't know what we're going to have to do. We'll try to find an adjustment. Go out there and hit 'em over the fence like my last at-bat, maybe."

The Padres are 5-0 against the Rangers at Globe Life Field, which opened last season, and have beaten Texas eight straight times overall. ... The Rangers, the only team in the majors allowing 100% fan capacity, attracted 163,853 spectators for their six-game opening homestand, an average of 27,309. ... Eli White was caught trying to steal second in the eighth inning, the first time in 10 attempts this season that a Texas baserunner has been thrown out.

Padres: Tingler said Morejon felt tightness on his third pitch to his final batter. "You hope everything's going to be all right," Tingler said.

Rangers: OF David Dahl (calf tightness) was held out Sunday after originally being penciled in as the DH and is day-to-day.