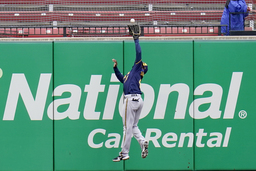 Keston Hiura hit a three-run homer that capped a five-run burst in the seventh inning that made it 8-2. The Brewers won for the third time in four games.

"You just got to keep working, and don't lose your energy, your focus," Garcia said. "Don't be frustrated because it's a hard game. And we can control our focus, our energy and what you pull every single at-bat."

Garcia's two-run homer off Carlos Martinez gave Milwaukee a 3-0 lead in the fifth. Garcia drew a bases-loaded walk in the sixth and added a two-run double in the seventh.

"Just a day to break through like that, at the start of the year, is great for your confidence and feel like you helped the team win and so he definitely did that today," Brewers manager Craig Counsell said.

Garcia's five RBIs marked his most since he drove in six on May 20, 2017 as a member of the White Sox.

He took a less is more approach with his swing.

"Just see it and hit it," Garcia said. "You're strong. I just have to touch it."

Brewers starter Adrian Houser (1-1) allowed runners in each of his five innings and was pulled after walking Yadier Molina to begin the sixth. Houser was aided by double plays in the second and third innings and he struck out Paul DeJong to escape a bases-loaded jam in the fifth.

Houser pitched around Nolan Arenado to load the bases ahead of DeJong.

"We were confident in knowing that we could get DeJong behind Arenado so we weren't willing to give him (Arenado) anything he could drive and get some runs in there," Houser said. "So, we played a little safe there. I had to make the pitches and we made the pitches and got out of it."

Martinez (0-2) gave up three runs in five innings. The right-hander has allowed seven earned runs in 10 innings this season.

"Stuff was good right out of the gate," Cardinals manager Mike Shildt said. "Maybe some changeups got some plate, guys put some swings on him."

Austin Dean hit a three-run homer in the Cardinals eighth. It was his first home run since Sept. 26, 2019 when we played for Miami.

Justin Williams advanced to third base in the sixth after reaching on an error that scored the Cardinals' first two runs. Williams was then hit by a line drive off Tommy Edman's bat. Williams thought he was in foul territory, but plate umpire Alan Porter ruled Williams was on fair side of the base line and called him out, ending the inning. The play was not reviewable.

"If your feet are in foul territory, but your body is in fair territory and it hits you, it's dead ball out and Alan said it went down and they had the ball fair and it hit him," Shildt said.

Cardinals: OF Tyler O'Neill was removed from the game after hitting into a double play in the second inning due to right groin tightness and was replaced by Dean. ... LHP Kwang Hyun Kim (back) will throw an extended game with about 90 pitches at the team's alternate training site on Sunday and could join the club on its next road trip beginning April 16.

LHP Brett Anderson (0-1, 7.20 ERA) will start for the Brewers against Daniel Ponce de Leon (1-0, 1.80 ERA) on Sunday. Anderson is 1-3 with a 3.32 ERA in four career starts against St. Louis, while Ponce de Leon allowed just one run in five innings while earning the win at Miami on Monday.