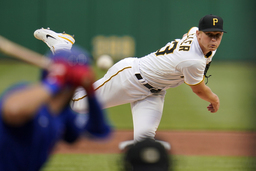 PITTSBURGH (AP) Mitch Keller's stuff has never been in question. It's a lack of command that sometimes handcuff the pitcher the Pittsburgh Pirates view as one of the cornerstones of what they're trying to build around.

The 25-year-old has been searching for it all spring, with little progress to show for all the work he was putting in on the side.

The search came to an end on Saturday night against Chicago. Working effectively up in the strike zone, Keller threw five efficient innings as the Pirates used an early burst to chase Zach Davies in an 8-2 win over the Cubs.

Keller (1-1) bounced back from a rocky 2021 debut by allowing one run on five hits with seven strikeouts and just one walk.

"I mean, had a rough spring, rough first outing," Keller said. "So it felt really good to just kind of have a good one out there. Just all the hard work I put in just kind of finally paid off tonight and really excited to keep going after this one."

Keller's fastball can touch the high 90s. Locating it effectively, however, is another matter. He walked batters in 11 1/3 innings in spring training and issued four free passes in three innings in a loss to the Cubs last weekend.

Things went far better in his second go-round with Chicago. At one point he retired nine of 10 batters and threw 57 of his 80 pitches for strikes, a significant step in the right direction after he threw just 42 of 77 pitches for strikes while laboring through three innings against Chicago last Sunday.

"Just got to put a lot of work in and just get confidence through little things, like throwing program, bullpens, whatever it may be to just find that confidence and have it translate over into the game," Keller said. "I was super confident out there tonight. I thought I did a pretty good job of not letting the first inning run get to me."

Colin Moran, Bryan Reynolds and Jacob Stallings all drove in two runs during Pittsburgh's seven-run outburst in the second against Davies (1-1). Phil Evans, with his brother Michael in the stands for the first time since Evans broke into the majors in 2017, added his team-high third home run.

Davies, acquired from San Diego in the trade that sent Yu Darvish to the Padres, gave up seven runs in just 1 2/3 innings, the shortest start of his seven-year career.

"Sometimes a game like this can motivate you. For me, tomorrow, the next day and every working day in between, that's what I'll think about," he said.

Javy Baez had two of Chicago's eight hits. Kris Bryant collected an RBI double in the first for the Cubs and Joc Pederson added an RBI single late but Chicago mustered little else against Keller and three relievers.

The Pirates held a moment of silence before the game to honor former usher Phil Coyne, who died on Friday at 102. Coyne spent more than 80 years helping fans to their seats at Forbes Field, Three Rivers Stadium and PNC Park before retiring in 2019.

"I mean working at Forbes Field, seeing Babe Ruth, that's like living legend type stuff," Pirates manager Derek Shelton said. "It's kind of cool. My heart goes out to him and his family and want to thank him for everything he did for the Pirates for a long time."

Cubs: First base coach Craig Driver is "doing OK" after testing positive for COVID-19. Cubs manager David Ross said the team's traveling party has tested negative every day since Wednesday and thinks the health protocols are one of the reasons the Cubs have not been further impacted.

"I think it's a mixture of everybody wearing their mask and trying to stay as diligent as possible," Ross said.

Mike Napoli is handling the duties at first base with Driver out. Ross joked that Driver says he'll stay out as long as necessary if means the Cubs keep scoring runs.

Cubs: Former Pirate Trevor Williams (1-0, 3.00 ERA) makes his first start at PNC Park as a visitor in the series finale on Sunday. Williams spent five seasons with the Pirates, going 31-37 with a 4.43 ERA Pittsburgh released him last November.