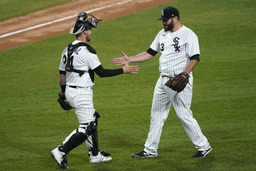 CHICAGO (AP) There wasn't much doubt Lance Lynn would go back out to finish this one. Manager Tony La Russa turned to him and asked how he was feeling.

Lynn pitched a five-hitter for the first complete game and shutout in the major leagues this season, and the Chicago White Sox beat the Kansas City Royals 6-0 on a rainy Thursday.

Yermin Mercedes kept up his scorching start with a 485-foot homer. Yoan Moncada went deep, and the White Sox gave manager Tony La Russa the win in his first home game on the South Side in 35 years.

Acquired from Texas in the offseason, Lynn threw 79 of 111 pitches for strikes in his fourth career complete game. The 33-year-old right-hander struck out the first three batters and did not allow a runner until Salvador Perez led off the fifth with an infield single.

La Russa saw Lynn's potential when he managed him in 2011 as a rookie with St. Louis. Lynn went on to become an innings-eating workhorse who can keep hitters off balance with a variety of pitches.

"He was really competitive," La Russa said. "Now, what he's added is experience. Ball does different things. He has three different fastballs. He has a nice breaking ball. He's really just become a veteran pitcher who understands, keeps adding here, adding there so the hitters have to see different things. It's really impressive."

Moncada hit a two-run homer in the first, and Mercedes followed with a long shot to left-center against Brad Keller to make it 3-0. The 28-year-old rookie went 2 for 4, giving him a major league-leading 15 hits in 27 at-bats. And the White Sox came away with an easy win in a game delayed more than two hours at the start.

La Russa had not managed a home game on the South Side since a loss to the California Angels on June 11, 1986. Chicago fired him soon in a move chairman Jerry Reinsdorf regretted allowing, and the White Sox brought back the Hall of Famer in October to replace Rick Renteria, hoping he can push them to a championship.

"I could feel the excitement," La Russa said. "The fans are looking forward to watching this club."

Keller (0-1), coming off the shortest opening-day start in franchise history, got tagged for four runs and six hits in 3 1/3 innings after getting just four outs against Texas last week.

"It was hard sinker, hard cut, trust movement," Royals manager Mike Matheny said. "I think that's probably a lot like the conversation that we've already had with Brad. He's got the ability to predominantly use that pitch - and use the other pitches off of it. He's just got to trust it a little bit more like we saw the guy on the other side. He trusted it more today."

White Sox: GM Rick Hahn said the White Sox expect star SS Tim Anderson (strained left hamstring) to return once he's eligible to be activated from the 10-day injured list on April 15. ... The White Sox placed OF Billy Hamilton (strained left hamstring) on the 10-day injured list and selected the contract of OF Nick Williams from their training facility in Schaumburg. Hamilton was replaced in the fifth inning of Wednesday's loss at Seattle due to tightness in his hamstring after stealing third. ... The White Sox also transferred LHP Jace Fry to the 60-day injured list. He's recovering from a microdiscectomy to repair a herniated disk.

The White Sox will try to win their 18th straight game against a left-handed starter and tie a major league record set by Atlanta from 2004-05 when they meet Mike Minor (1-0, 6.00) on Saturday. Chicago's streak dates to a loss to Detroit on Sept. 28, 2019, when lefty Tyler Alexander started for the Tigers but did not figure in the decision. RHP Dylan Cease (0-0, 5.79 ERA) pitches Saturday for Chicago.