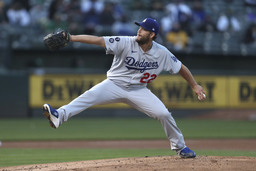 OAKLAND, Calif. (AP) Clayton Kershaw got his slider back on track and helped the Los Angeles Dodgers continue their strong start. Make it five in a row for the defending World Series champs.

The Oakland Athletics are at the opposite end of the spectrum, still searching for their first victory after winning the AL West in 2020.

Kershaw struck out eight in seven smooth innings to send the Athletics to their worst start in more than a century, and the Dodgers beat winless Oakland 5-1 on Tuesday night.

"He had everything working. He was getting ahead and getting a lot of swing and misses with the slider," Los Angeles manager Dave Roberts said. "Really stellar night. To come back (from his opening day loss) and follow it up with what he did, he's right where he needs to be."

Mookie Betts homered for the first time this season, a towering solo shot to left-center in the ninth. Max Muncy and Edwin Rios also went deep for the Dodgers (5-1).

At 0-6, the A's have matched the poorest start in franchise history. The 1916 Philadelphia Athletics also began the season with six consecutive losses.

Oakland and Atlanta (0-4) are the only winless teams in the majors.

"It (stinks) to start this way but we know how good we are," A's starter Chris Bassitt said. "It's just embarrassing right now."

Knocked around in his first outing at Colorado - the Dodgers' lone defeat this season - Kershaw (1-1) was much more crisp against slumping Oakland. The three-time NL Cy Young Award winner allowed one run and four hits, didn't walk a batter and retired 20 of 22 following Ramon Laureano's RBI double in the first.

"Just better overall," Kershaw said. "A little bit sharper than last time. I kind of like pitching here. It's a cool place."

It helped that the Dodgers stayed hot at the plate, reaching double digits in hits for the fifth time in six games.

"Our team's unbelievable," Kershaw said. "If one guy's not having a great game, the other six are. We're getting 10 hits a night, scoring five runs a game. It's really exciting for the rest of the year."

Kershaw also got a little help from instant replay.

Stephen Piscotty appeared to hit a two-out homer down the left-field line in the fourth, although no signal was given by third base umpire Brian Gorman or plate ump Adrian Johnson. Piscotty rounded the bases and crossed home plate as Roberts protested. After all four umpires met in the infield and ruled the ball foul, A's manager Bob Melvin asked for a replay review and the call was confirmed. Piscotty then grounded out.

"I didn't get any confirmation from the home plate umpire," Melvin said. "The first base umpire told me it was 15 feet foul."

Blake Treinen and Kenley Jansen retired three batters apiece for Los Angeles to close it out.

Jed Lowrie had two hits and scored Oakland's only run.

"I haven't had a lot of teams, when I'm missing spots, hit me like that," Bassitt said.

MORELAND STARTS, SHINES AT 1B

With injured Oakland first baseman Matt Olson out of the lineup, Mitch Moreland made back-to-back defensive gems in his first start of the season. The A's DH for the first five games, Moreland made a heads-up play to throw out Gavin Lux at the plate after stopping Betts' grounder in the second. The 35-year-old followed that up with a sliding grab on Corey Seager's sharp grounder down the line and threw to Bassitt covering first to end the inning.

Dodgers: CF Cody Bellinger is day to day after tests on his injured calf showed no fractures. Bellinger was out of the lineup after getting spiked Monday. . OF Chris Taylor (left elbow bruise) was feeling better but did not start after getting hit by a 96 mph fastball from Frankie Montas in the series opener.

Athletics: Olson was scheduled for an MRI on his bruised left knee, an injury that occurred when he slid into a wall chasing a foul ball last weekend. . Expected closer Trevor Rosenthal flew to Dallas to meet with a specialist for his sore right shoulder. . RHP Mike Fiers pitched in a practice game Monday, his first time facing hitters after sitting out all of spring training with a hip injury. ... RHP Burch Smith (right groin strain) and LHP Reymin Guduan (sprained left thumb) were placed on the injured list.

Dodgers RHP Trevor Bauer (1-0, 5.68 ERA) pitches the series finale Wednesday. Bauer had 10 strikeouts and took a no-hitter into the seventh inning at Colorado in his Los Angeles debut. LHP Jesus Luzardo (0-1, 9.00) starts for Oakland, his first against the Dodgers.