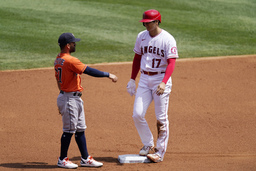 Kyle Tucker and Aledmys Diaz hit back-to-back homers in the second inning for the Astros, who went an impressive 5-1 on their six-game road trip to start the season amid the incessant booing and jeering they'll hear indefinitely as fans react to their sign-stealing scandal in the 2017 and 2018 seasons.

"They seem unfazed by all the jeers and all the booing," Houston manager Dusty Baker said. "It helped them concentrate even more at the start of the year. This team is very secure in their abilities, and they're secure on and off the field."

Mike Trout hit a 464-foot homer in the first inning and Shohei Ohtani had two hits, but the Angels dropped to 4-2 and failed to match the best six-game start in franchise history.

Correa then crushed an 0-2 fastball off the low video board above the right field wall at Angel Stadium for his first homer of the season.

"You want to get all of these close wins that you can," Correa said. "I don't know how many walk-offs I've got in my career, how many in the ninth inning, but I like hitting late in the game, when the game is on the line. That's when I feel sexy."

Iglesias has already given up two homers this season - one more than he allowed in all of 2020 with Cincinnati.

"I definitely believe my stuff is still there," said Iglesias, who also has a win and a save for Los Angeles. "My confidence is still there, too. I'm going to keep going up there even if they hit 20 homers off me."

"The guys are seeing the ball really well," said Pressly, who approached Baker before the game to ask for more work. "We're pitching really well and playing really good defense. We're kind of clicking all around. You're not going to win the season in April, but you can definitely lose it, so it's been great to see, for sure."

Angels fans again serenaded the Astros' veterans with choruses of boos, showing most baseball fans' anger over Houston's sign-stealing scandal. Although nobody threw a trash can onto the Angel Stadium field as they did in the series opener, the day crowd included a fan in a full-size Oscar the Grouch costume.

Trout homered in both games against Houston, and the three-time AL MVP's long homer Tuesday was traveling 113.2 mph off the bat.

Astros: OF Michael Brantley might have been available to pinch-run or to play defense, Baker said. Houston is hoping he'll return from his right wrist injury for its home opener Thursday.

Angels: Anaheim native Jose Rojas made his first major league start, filling in at third base in place of Anthony Rendon, who got a rest day. Rojas went 0 for 2, but reached base for the first time on a seventh-inning walk, Greinke's first of the season.

Greinke followed up his six scoreless innings on opening day with seven strong innings of five-hit ball for the Astros. His only major mistake was the low slider that was clobbered by Trout.

"Pretty much every part of the game has gone good," Greinke said. "Pitching has been good. Defense and hitting has been amazing. It won't continue like this the whole year, but it's a really good start."

Greinke worked to a stalemate with Angels opening day starter Bundy, who struck out 10 over six innings of four-hit ball in another strong outing.

After the Astros' back-to-back homers, Bundy allowed no other hits over his first five innings while racking up nine strikeouts.

"That's what the game is turning into, is how many homers can you not give up that day," Bundy said. "After that, it definitely makes you focus a little bit more and bear down."

Angels: Griffin Canning will make his season debut Thursday in Dunedin, Florida, when the Halos open a four-game series with the displaced Toronto Blue Jays. Canning's first start was pushed back from Tuesday when he had to warm up in the bullpen last Sunday during a close game with Chicago.