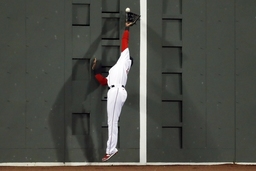 BOSTON (AP) Randy Arozarena got twisted around in deep right field on J.D. Martinez's two-run double with two outs in the bottom of the 12th inning, sending the Boston Red Sox past the Tampa Bay Rays 6-5 on Tuesday night.

The Rays were in line to win before Christian Vazquez belted Diego Castillo's 0-2 pitch over the Green Monster for a tying homer leading off the ninth.

"We did a good job," Boston manager Alex Cora said. "We didn't give up. That's the sign of a good team. ... We won the series against the American League defending champs. That's a good bounce back and we've got a chance to sweep them."

Martinez had an RBI double in the eighth for the Red Sox, who won their second straight after an 0-3 start.

Manuel Margot hit a two-run single for the Rays, who wasted a strong six-inning effort by starter Tyler Glasnow. Tampa Bay lost the series opener 11-2 on Monday night and has dropped three in a row.

"The winning run is on second base," Martinez said of his clutch hit. "He's got to shade in there. That's the only way I could beat him."

With runners on second and third after a wild pitch by Ryan Thompson (1-1), Martinez hit a well-struck drive to deep right. It sliced back over the head of Arozarena and he made an unsuccessful dive back toward the wall as the ball fell beyond him for the game-winning hit.

"Randy is about as close to Superman as you can get," Thompson said. "I'm a sinkerball pitcher, I can't let J.D. hit a ball like that."

Phillips Valdez (1-0) got the victory.

"J.D. has been swinging the bat well from opening day on, and he got us," Tampa Bay manager Kevin Cash said. "J.D. put a charge on it and it just continued to carry."

Arozarena's grounder drove in Mike Zunino in the top of the inning.

Each team knocked in their placement runner with a leadoff hit in the 11th.

Coming off six scoreless innings in his first start of the season when he gave up just an infield hit, the hard-throwing Glasnow struck out nine and allowed one run on four hits with two walks. He permitted his only run on a wild pitch in the first.

Boston starter Martin Perez gave up three runs on five hits, striking out six and walking two in five innings. He was pulled after walking the leadoff hitter in the sixth.

The Rays jumped ahead 2-1 on Margot's bases-loaded single in the third that snuck between first baseman Marwin Gonzalez and second baseman Christian Arroyo.

Boston left fielder Franchy Cordero made a leaping catch at the Green Monster with runners on first and second with one out. As he made the grab, his glove smacked the wall, sounding as though the ball hit the Monster. Cordero fired to second because the runners had advanced thinking the ball was in play, so shortstop Xander Bogaerts stepped on the bag. Third base umpire Dan Iassogna ruled a catch and replay upheld the call, so the double play stood, too.

"It did sound like it (hit), but I'm sure MLB had enough cameras on it," Cash said.

Arroyo struck out swinging to end the fifth, banged his bat off the plate in disgust and a piece splintered off.

Rays: Placed OF Kevin Kiermaier on the 10-day injured list with a left quadriceps strain sustained Monday. They recalled INF Kevin Padlo from the taxi squad. He made his major league debut and went 0 for 2, striking out in his first big league at-bat.