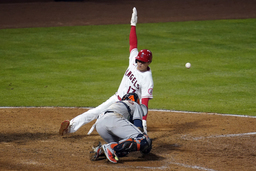 ANAHEIM, Calif. (AP) Even though the season is less than a week old, Mike Trout and the Los Angeles Angels are mastering the art of late-inning comebacks.

The Angels won for the third straight game with a late rally, this time beating the Houston Astros 7-6 Monday night in a wild atmosphere at Angel Stadium.

"The whole homestand has been unbelievable," said Trout, who hit his first home run of the season in the fourth. "We have to keep it up. Everyone up and down the lineup is feeding off each other, which is good to see."

The Angels got weekend wins over the Chicago White Sox with go-ahead home runs. This time they rallied for four runs in the eighth on three singles, a sacrifice fly and a Houston error to open 4-1 for the first time since 2007.

"It is easy to say we don't quit, but we don't. The vibe in the dugout is good," manager Joe Maddon said. "We got quality at-bats up and down the lineup."

Shohei Ohtani, out of the starting lineup after pitching 4 2/3 innings Sunday night and getting upended while covering home plate, entered as a pinch-hitter after Albert Pujols and Jose Iglesias opened the eighth with singles. Ohtani was hit by a pitch from Joe Smith (0-1) and exchanged glances with the Houston reliever as he made his way to first base.

"Emotions were high. He's hot at the plate right now and wanted to hit," Trout said.

Blake Taylor gave up a single by Dexter Fowler that scored Pujols. Iglesias tied it at 5 when he scored on David Fletcher's fielder's choice. First baseman Yuri Gurriel made a diving stop on a sharp grounder by Jared Walsh but his throw home was wide, allowing Ohtani to score and put the Angels on top for the first time all night.

Fletcher came home on Anthony Rendon's sacrifice fly, making it 7-5. The extra run came in handy when Kyle Tucker homered in the ninth off Mike Mayers, who got his first save.

With fans allowed in the stands, the game had a playoff vibe. Los Angeles Dodgers fans made the short trip down to Orange County to lend their voices to the chorus of boos that greeted the Astros on their first trip to Angels Stadium this year.

This was the first chance Dodgers and Angels fans got to boo the Astros since their sign-stealing scandal came to light. Houston beat the Dodgers in seven games in the 2017 World Series.

"I mean, you could tell the amount of hostility and hatred in the stands," Astros manager Dusty Baker said. "You know you can't let that bother you. You have to channel it. You can't carry that scarlet letter around all your life. I mean, we paid the price."

Jose Altuve, Alex Bregman and Carlos Correa received the loudest boos. Fans chanted "cheater" and "where's your trash can?" during the early innings. An inflatable trash can was thrown out of the right-field bleachers during the sixth, and a real one filled with trash made its way to the warning track an inning later.

"It used to be beach balls, now it is trash cans. I don't think it bothered them," Maddon said. "It's entertaining. It helped the fans vent. I think it does fuel the Astros."

Both starting pitchers made it only 3 1/3 innings.

Jose Quintana made his Angels debut but fell behind early. Houston jumped out to a 3-0 lead in the first on RBI singles by Bregman and Correa. Aledmys Diaz struck out swinging on what should have been the third out, but went to first on a wild pitch as Yordan Alvarez scored from third.

The Astros chased Quintana, who allowed four runs on five hits, after Altuve's one-out single in the fourth.

Houston's Luis Garcia yielded only two walks in his first three innings before things unraveled. Trout began the comeback with a moonshot to left field on a changeup, and Iglesias cut the deficit to 4-2 with an RBI single. The right-hander's night ended when he walked Kurt Suzuki to load the bases.

Los Angeles pulled to 4-3 an inning later when a base hit by Justin Upton drove in Walsh.

The Astros responded with a run in the sixth when Martin Maldonado beat the tag at home on Alvarez's single.

Astros: OF Michael Brantley (wrist) was out of the lineup for the second straight game, but Baker is optimistic Brantley could be back Tuesday. ... RHP Andre Scrubb (shoulder) did some throwing, but still isn't expected to rejoin the team for at least another two weeks.

Angels: RHP Griffin Canning had his start pushed back to Thursday against Toronto after warming up and being ready to go in case Sunday's game went to extra innings.

Houston right-hander Zack Greinke (1-0, 0.00 ERA) makes his second start of the season after allowing three hits over six innings against Oakland in the April 1 opener. Los Angeles RHP Dylan Bundy (0-0, 4.50) did not factor in the decision after permitting three runs over six innings against the White Sox in the opener. Bundy is 0-3 in six career starts versus Houston.