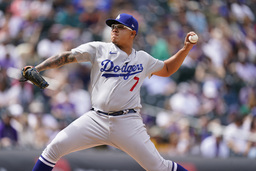 DENVER (AP) Julio Urias got off to a strong start after a fine finish in last year's World Series, pitching into the eighth inning as the Los Angeles Dodgers beat the Colorado Rockies 4-2 Sunday.

The champion Dodgers won the last three in a strange four-game series at Coors Field that featured a home run turned into a single on opening day, a cat running into the outfield, an inside-the-park homer and spraying fountains that distracted hitters.

"There's always a relief when you get out of Coors," manager Dave Roberts said. "Our guys do a great job of embracing the schedule, and this is part of the schedule. It's taxing, physically, mentally on the players, myself. It was exciting baseball all the way around and ultimately to win three of four here was a good start for our season."

Urias (1-0) gave up one run and three hits in the longest start of his career. The 24-year-old left-hander struck out six and walked one in his season debut. He needed just 77 pitches to get through seven innings and exited after Ryan McMahon singled to lead off the eighth.

"I felt great, I felt really, really good about everything," Urias said through a translator. "The pitches were all working really well today, everything was going the way I wanted it to be, especially in a place like this."

Urias had a brilliant postseason last year as the Dodgers won their first title since 1988. He was 4-0 while allowing just three earned runs and striking out 29 in 23 innings, and he capped off the Game 6 clincher against Tampa Bay in the World Series with 2 1/3 hitless innings for a save.

Austin Gomber (0-1) walked seven and struggled in his debut with the Rockies. He issued four walks and had a throwing error in the first inning when Los Angeles scored three runs without a hit.

"Here's a guy that probably wanted to, on his very first day in a new uniform, in front of a home crowd, to really perform well and it went the other direction," manager Bud Black said. "His stuff was fine. If you just grade out the stuff on velocity and action and movement, everything was fine except the ability to get the ball consistently in the strike zone."

The seven walks were a career high for Gomber.

"I don't think I pitched bad, I just didn't throw strikes," Gomber said. "I gave up one hit, I walked seven guys in three innings. I don't think that's nerves, it just wasn't my day."

Will Smith homered leading off the Dodgers eighth. Garrett Hampson had a two-run double in the bottom of the inning to account for Colorado's scoring.

Dodgers: OF Cody Bellinger and SS Corey Seager were given the day off. Manager Dave Roberts is mixing in days off with the Los Angeles playing every day for the first 12 days of the season.

Rockies: RHP Jon Gray is expected to make his next scheduled start, manager Bud Black said. He left Saturday night's game in the sixth inning with full-body cramps. ... INF Josh Fuentes was a late scratch from the lineup with a sore wrist.

RHP Tony Gonsolin was put on the 10-day injured list Sunday with right shoulder inflammation, a move retroactive to Thursday. The Dodgers recalled righty Dennis Santana from the alternate training site at Glendale, Arizona, to fill the roster spot.

Gonsolin, 26, made the opening-day roster for the first time but has not pitched this season.

"That shoulder inflammation, it's something that's been kind of lingering for the last few days," Roberts said. "He went out there and played catch today, didn't feel great so I think it's more being cautious with Tony being a big part of our club."

Dodgers: RHP Dustin May makes his season debut at Oakland on Monday. May went 3-0 with a 2.37 ERA in five Cactus League games, four starts.

Rockies: RHP German Marquez gets his second start when Colorado opens a series against Arizona on Tuesday. Marquez allowed one run in four innings against Los Angeles on Thursday.