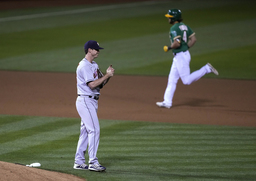 OAKLAND, Calif. (AP) Alex Bregman hit a three-run homer for his second longball in two games, and the Houston Astros slugged past the Oakland Athletics 9-5 on Friday night.

Yuli Gurriel also connected and Michael Brantley added a run-scoring double as Houston jumped out to a big lead again - a night after the Astros won the opener 8-1 behind Zack Greinke's six shutout innings.

Kyle Tucker hit a sacrifice fly in the seventh as Houston added an insurance run - and it was an important one, as Chad Pinder connected for a two-run homer in the bottom half.

Houston's Jose Altuve reached base in all five of his plate appearances, with three hits and two walks.

"Well Altuve's obviously hot. The guy behind him is even hotter," A's manager Bob Melvin said of Brantley, who had three hits for the second straight game.

The Astros have scored 17 runs in their first two games.

"I feel really good. The only thing I'm trying to do right now is get on base," Altuve said. "Obviously I have great hitters behind me ... I feel I need to get on base and let them do the rest."

Left-hander Jesus Luzardo (0-1) struck out eight with one walk over five innings, surrendering the two homers among his eight hits and five runs.

Astros righty Cristian Javier, a five-game winner last year in his first big league season, didn't allow a hit until Mark Cahna's infield single before Ramon Laureano followed with an RBI triple to put Oakland on the board.

Not a bad first couple of games for Houston.

"These young guys are stepping up. This is what you want to see," manager Dusty Baker said.

Mitch Moreland added a sacrifice fly for his first RBI since joining the A's on a $2.25 million, one-year contract.

Melvin has a contract option for 2022 and, no surprise, insists he wants to stay put.

"I have no desire to go anywhere else," Melvin said. "I'm perfectly happy here and my bosses have taken good care of me here. So that's where I stand on it. It's not my job to pick up an option, it's the people above me, but I'm really happy here."

This week, general manager David Forst said: "His option at this point is more a function of what he wants to do rather than what we want."

Astros: C Jason Castro will earn a start behind the plate Sunday as Martin Maldonado gets a rest day. "Maldy needs a break before we go to Anaheim," said Baker, who noted Maldonado has ample experience with Saturday starter Lance McCullers Jr.

Athletics: RHP Frankie Montas is on track to start Monday against the World Series champion Dodgers after leaving his final spring training start March 25 with a ripped cuticle on his right middle finger. He was scheduled to throw one more bullpen session Friday. "Everything's looking as a go," Melvin said. "... I looked at the nail, I'm not a doctor, but it looks good to me so I think we're a full go on him." ... RHP Mike Fiers, on the 10-day injured list retroactive to Monday with a lower back strain, is likely to do his next throwing session soon at the team's Stockton alternate site.

RHP McCullers pitches for the Astros on Saturday opposite LHP Cole Irvin making his A's debut after pitching the past two seasons for the Phillies.