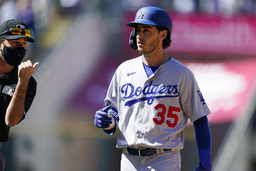 DENVER (AP) Cody Bellinger homered over the fence for an RBI single and an out.

It looked as confusing as it sounds.

On an afternoon Bellinger had a homer negated due to a baserunning mistake, the Colorado Rockies played plenty of small ball to beat the defending World Series champion Los Angeles Dodgers 8-5 on Thursday in their season opener.

The Rockies scored runs courtesy of a squeeze play, two wild pitches, a groundout, an error and three RBI singles.

No long ball in this game.

Well, one, but it didn't count.

Bellinger lined what appeared to be a two-run homer to left-center in the third inning. The ball hit off the glove of outfielder Raimel Tapia and bounded over the fence. Justin Turner was on first base at the time and, believing the ball was caught, retreated back to the bag. Bellinger passed Turner in the confusion and the umpires ruled Bellinger out.

"I don't think there was blame to be placed," manager Dave Roberts said. "They kind of got crossed.

"I don't think it's going to happen again this year."

Rockies manager Bud Black wasn't sure if he had ever seen that sort of situation.

"It's rare you see that home run and then the batter/runner pass the fellow who was on base," Black said. "But it happened today."

Officially, Bellinger was credited with a single and an RBI, but no home run. Rockies second baseman Chris Owings picked up the putout on the crazy play for being the closest fielder.

Colorado started off on the right foot against Clayton Kershaw and the perennial NL West-champion Dodgers, who owned a 22-7 record over the Rockies the last two seasons.

Reliever Chi Chi Gonzalez got the win after allowing three runs over two innings. Daniel Bard pitched a shaky ninth but got Mookie Betts to line out with the bases loaded to pick up the save as 20,570 fans were allowed into Coors Field.

This marked the first time Colorado opened in Denver since 2011.

Asked later if there was anything in particular he didn't like, Kershaw responded: "The runs being scored."

"He was just a little bit off," Black said.

Dodgers: C Austin Barnes left in the seventh inning after cutting his throwing hand during a close play at the plate following a wild pitch. "I think he's fine," Roberts said.

Entering the season as the defending champions doesn't feel any different to Turner.

"It's the same excitement, the same buzz, the same opportunity in front of us," he said.

ALL IN THE FAMILY

Sometimes, shortstop Trevor Story will glance over at third base and swear Nolan Arenado is still around. Josh Fuentes has a resemblance to Arenado - and happens to be Arenado's cousin.

Fuentes stepped in at third for Arenado, who was an eight-time Gold Glove winner for the Rockies before being dealt to St. Louis in the offseason.

"I always tell him I have to take a double-take to decipher him and Nolan sometimes," Story said.

Owings had three hits, including a triple, and scored three times. He also stole two bases and drove in a run.

"That was a really good game for Chris," Black said.

Reigning NL Cy Young winner Trevor Bauer makes his Dodgers debut against Colorado on Friday. Bauer was 5-4 with a 1.73 ERA last season for Cincinnati. Rockies righty Antonio Senzatela was 5-3 with 3.44 ERA in 2020.