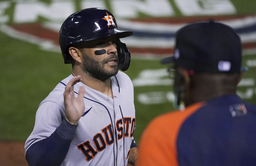 "He was kind of in midseason form," Baker said.

"I'm not really worried about Greinke. He's in much better shape this year. Last year it didn't look like we were going to come back," Baker said.

A's fans had to wait an extra year to properly boo the Astros, who were supposed to play their first road game of the coronavirus-shortened 2020 season here last spring. Houston's sign-stealing scandal was brought to light by A's right-hander Mike Fiers against his former club, and many in the crowd chanted "Cheaters!"

"Got to hear some boos finally, that wasn't that fun to listen to," Greinke said, "but we played good so it ended up being better."

Among the biggest cheers of the night: when Carlos Correa was drilled by Chris Bassitt's fastball in the fourth inning with a runner in scoring position.

Backed by a two-run double from Yordan Alvarez, Greinke (1-0) allowed three hits, struck out four and didn't walk a batter in Houston's club-record ninth straight win on opening day. It marks the majors' longest active streak, and the Astros joined only four other teams since 1900 to win nine consecutive season openers, according to the Elias Sports Bureau: Mariners (2007-15), Reds (1983-91), Mets (1975-83) and St. Louis Browns (1937-45).

The game drew a sellout of 10,436, with the ballpark at 20% capacity as baseball fans returned to the Coliseum for the first time since the A's lost at home to Tampa Bay in the AL wild-card game on Oct. 2, 2019.

Houston lost all but one of eight games in Oakland in 2020 before eliminating the A's in a four-game Division Series last fall.

Bassitt (0-1), a right-hander who went 5-2 over 11 starts to emerge as the A's ace last season, allowed three runs and four hits over 5 1/3 innings. He struck out three and walked two.

New A's shortstop Elvis Andrus delivered the first Oakland hit with a ground-rule double in the third. Andrus made his A's debut after being traded in February from Texas in exchange for designated hitter Khris Davis.

And Oakland Platinum Glove third baseman Matt Chapman's return to the hot corner meant so much after he played only 37 games in 2020 because of a right hip injury that required surgery in September.

Chapman hit a seventh-inning sacrifice fly - and he hardly cares if people count out these A's already.

"We like being the underdogs," Chapman said. "That just means we're playing with house money. We're not expected to do anything, so everything we do is great. But I know it's a different vibe in this clubhouse. We're expecting to win the division."

Lifelong Athletics fan and Oakland native Amelia Schimmel made her first appearance as public address announcer after replacing the late Dick Callahan, who was remembered in a pregame tribute.

"It's so surreal. It's also strange to think that last year at this time I was nervous for a number of different reasons and there weren't fans yet," she said. "When I first pressed that button I had never done it before and there were all those nerves. Knew it was 10,000 cardboard cutouts, but I knew that the players were listening and the media was listening.

"Now, you have the fans in, that's a level of excitement that I just can't fathom right now."

Schimmel is the third active female PA voice in the big leagues, joining Renel Brooks-Moon across San Francisco Bay with the Giants and Marysol Castro with the New York Mets. The Orioles also called up Adrienne Roberson from the minors to serve as PA announcer during the shortened 2020 season.

Callahan - whose cardboard cutout is close by Schimmel in the booth - died in January at age 80 after 15 seasons on the microphone for home games at the Coliseum.

Athletics: Fiers was placed on the 10-day injured list retroactive to Monday with a lower back strain, and reliever Trevor Rosenthal also went on the IL retroactive to Tuesday with inflammation in his throwing shoulder. He will remain with the team to rehab. "He's not going to throw for a while," Melvin said.

Left-hander Jesus Luzardo takes the ball in the second game of the series for the A's opposite Astros righty Cristian Javier, a five-game winner last year in his first big league season.