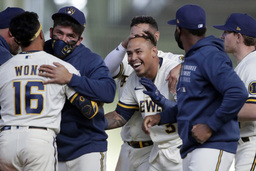 MILWAUKEE (AP) Travis Shaw began his second stint in Milwaukee eager to play in front of Brewers fans again, particularly because he knew how much they missed going to games last season.

Shaw made sure those fans went home happy by sparking a rally that marked the latest chapter in his own comeback story.

Lorenzo Cain scored the winning run in the 10th to give the Brewers a 6-5 victory over the Minnesota Twins on Thursday after Shaw's two-out double capped a three-run rally in the ninth.

"It just wasn't the same last year," Shaw said. "For me personally, after a tough ending my first time here, it was nice to hear the roar again."

Shaw played for the Brewers from 2017-19 but slumped badly his final season in Milwaukee and ended up in Toronto last year. He signed a minor-league deal with the Brewers before the season.

His big hit delighted the crowd of 11,740 at Milwaukee's American Family Field. Local health officials are allowing spectators to fill 25% of the stadium's seating capacity this year after the pandemic prevented fans from attending games last season.

"When you get these fans and especially at AmFam, man, we get loud, I think that's a big adrenaline push for us," said Josh Hader, who hit 100 mph while striking out three batters in the top of the 10th.

The Brewers forced extra innings by scoring three unearned runs in the ninth off closer Alex Colome in his Twins debut. The Twins had built a 5-2 lead by getting a two-run homer from Byron Buxton and three hits from Max Kepler.

With one out, Colome hit Kolten Wong in the hand with a pitch. Keston Hiura followed with a bouncer to Colome, who made a poor throw to second rather than taking the easy out at first. The error put runners on first and second.

Christian Yelich delivered a deep fly to right that went off Kepler's glove for an RBI single.

"We had an opportunity to win the game," Twins manager Rocco Baldelli said. "We didn't come through."

After Hiura and Yelich advanced to third and second on Avisail Garcia's grounder to the right side, Shaw ripped a game-tying, two-run double to right center.

Cain opened the bottom of the 10th inning on second base and moved to third when Omar Narvaez singled to right off Randy Dobnak (0-1). Orlando Arcia then hit a bouncer to second baseman Jorge Polanco, whose throw to the plate wasn't in time to get a sliding Cain.

The Twins left 13 men on base and wasted one more opportunity in the top of the 10th.

Minnesota's Andrelton Simmons opened the top of the 10th on second and advanced to third on a one-out wild pitch, but Hader (1-0) struck out Luis Arraez and Jake Cave to end the threat.

"This is the most electric Josh Hader I think I've ever seen, including playoffs," Brewers starter Brandon Woodruff said. "He was throwing some BBs in there. They were missiles."

Twins: Josh Donaldson appeared to struggle getting around first base on a first-inning double and left the game in the bottom half of the inning. A calf injury limited the three-time All-Star and 2015 AL MVP to 28 games last year, his first with the Twins after signing a four-year, $92 million contract.

Baldelli said this injury didn't appear to be related to the calf problem Donaldson had last year. Donaldson will be re-evaluated Friday.

"Obviously there has to be some concern, but we'll wait and see until we know a little bit more to comment any further," Baldelli said.

Brewers: Wong stayed in the game after getting hit in the hand with a pitch in the ninth.

The Twins and Brewers take Friday off before meeting again Saturday in Milwaukee. Right-hander Jose Berrios (5-4, 4.00 ERA last season) starts for the Twins. Right-hander Corbin Burnes (4-1, 2.11) will pitch for the Brewers.