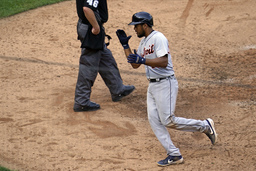 Detroit erased a four-run deficit by raking Minnesota's relievers in the late innings. The Tigers snapped a streak of five straight losses to the Twins and four losses overall.

"You don't want to lose five in a row, particularly the way we lost those four," said Detroit bench coach Lloyd McClendon, who managed Sunday's game with manager Ron Gardenhire out sick. "We knew it was going to be an uphill battle."

Tigers reliever Kyle Funkhouser (1-1) earned his first career win and while Bryan Garcia pitched a scoreless ninth for his first big league save.

After falling behind 6-2 after five innings, Detroit scored eight times over the next three innings. Greiner's homer, which made it 8-7, glanced off Rosario's glove before ending up just over the wall. Jonathan Schoop and Miguel Cabrera each drove in a run later in the inning.

"Rosario scared me out there in left field. He's made those plays before," Greiner said. "I was just happy rounding the bases, seeing my teammates excited we took the lead there in the late innings."

Detroit scored three runs off reliever Trevor May and two against Tyler Duffey in the sixth and seventh innings before Greiner connected off Sergio Romo (1-2). The Tigers finished game with 17 hits, one shy of their season high.

"We haven't seen many games play out like that this year," Twins manager Rocco Baldelli said. "Guys that have been fantastic for us, guys coming out of the bullpen that have been pretty much lockdown from the beginning of the season until now, didn't pitch as well as they normally do. That's going to happen."

Tigers third baseman Sergio Alcantara homered on the second major league pitch he faced, sending a solo shot off Rich Hill to left field in the third. Alcantara had never played above Double-A prior to his big league debut at Target Field and had just nine career minor league homers.

"I fainted, so when I woke up he was in the dugout," McClendon joked when asked about his reaction to Alcantara's homer. "I don't think anybody in the dugout expected a home run on his first at-bat."

Twins second baseman Luis Arraez returned to the lineup after missing four games with left patellar soreness. He hit an RBI double in the fifth that gave Minnesota a 3-2 lead.

Rosario homered in the eighth.

Funkhouser said he kept a game ball from his first career win Sunday, but noted that he might have to battle Garcia for the lineup card since Garcia notched his first save.

"It was a pretty good feeling," Funkhouser said of his first win.

Funkhouser allowed one run in two innings to earn the win.

Tigers: Gardenhire missed the game due to a stomach bug that forced him to leave Saturday's game early. McClendon, who took over for Gardenhire on Saturday, managed the Tigers on Sunday. McClendon said he expects Gardenhire to return Monday.

Twins: DH Nelson Cruz didn't play due to mild hip tightness, but the Twins said it was basically a regular day off for Cruz. The 40-year-old slugger had played in 40 of Minnesota's 41 games prior to Sunday.

Tigers: RHP Michael Fulmer (0-0, 7.27 ERA) takes to the mound Monday for his seventh outing of the year. Still working his way back from Tommy John surgery, Fulmer has not pitched more than three innings in any of his six starts this season.

Twins: RHP Michael Pineda (0-0, 3.00 ERA) will make just his second start of the season after returning this week from a 60-game suspension that began last season. Pineda allowed two runs in six innings but did not earn a decision against the White Sox in his season debut Tuesday.