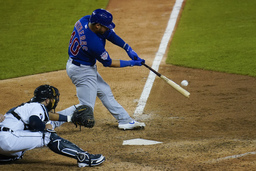 The Tigers have won three of five since a nine-game losing streak dropped them out of serious postseason contention. Chicago still leads the NL Central despite going 5-8 in its last 13 games.

Spencer Turnbull (3-2) picked up the win with 5 2/3 scoreless innings. He allowed three hits and walked three while striking out five. In his previous start, he only lasted two innings, walking four batters.

"After my start in Chicago, there were a couple things I knew I wasn't doing well, especially with runners on base," he said. "I made a point to work this week on slowing myself down and I thought it definitely helped today."

Cubs starter Tyler Chatwood (2-2) struggled in his return from the injured list, allowing eight baserunners while getting just four outs.

"I just think he needs to find his rhythm again," Cubs manager David Ross said. "His stuff looked good, but he was spiking too many pitches in the dirt."

Miguel Cabrera gave the Tigers the lead with a first-inning RBI single. Jeimer Candelario doubled and Niko Goodrum walked to load the bases with one out and JaCoby Jones made it 2-0 with a sacrifice fly.

Chatwood walked the bases loaded again with one out in the second, ending his game. Duane Underwood came out of the bullpen to strike out Candelario and Goodrum.

"You are always trying to stay ready in the bullpen, because you never know when you are going to end up in the game in a crucial spot," Underwood said. "At that point, you just want to keep the team in the game."

Turnbull walked the leadoff hitter in the sixth but retired the next two before he was replaced by Bryan Garcia.

"He threw the ball really well and he got us through five and almost through the sixth," Tigers manager Ron Gardenhire said. "He really wanted another batter, but that was as far as I wanted to go with him."

The Tigers put the game away with five runs in the bottom of the sixth. Cameron Maybin made it 3-0 with an RBI double off Jose Quintana and Schoop hit his fourth career grand slam, off Casey Sadler.

"In a spot like that, I'm looking to hit the ball hard and at least get a sacrifice fly," Schoop said. "We had missed some opportunities earlier in the game, and I didn't want to let another get away. Our pitchers deserved more runs than we had given them."

Willson Contreras led off the ninth with a homer off Buck Farmer.

Cubs: Chicago activated Chatwood (back strain) and Quintana (thumb) from the 10-day injured list and optioned RHP Jason Adam and OF Ian Miller to the team's alternate training site.

Quintana was pitching for the first time since Sept. 26. He allowed three runs in three innings.

"It felt great to be back out there," he said. "It has been almost a year since I've been on the mound, and I thought it went well until that last inning."

Tigers: Jones left the game with tightness in his right calf. Gardenhire said his status would be updated on Thursday.