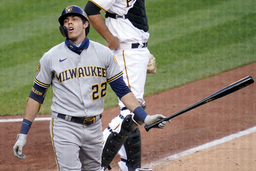 PITTSBURGH (AP) Derek Shelton has made it a point to keep reminding Gregory Polanco of all the little things the Pittsburgh Pirates right fielder is doing right in the batter's box during a season-long slump. Keep at it, the first-year manager stressed to the longest-tenured player on his team. You're on the right track.

A track Polanco believes he can actually see after his first multihit game in 15 months propelled the Pirates to a 12-5 victory over the Milwaukee Brewers on Saturday. Polanco hit his third homer of the year and also doubled as Pittsburgh won back-to-back games for the first time since last September.

While Polanco scuffled, Shelton remained adamant about playing him regularly, confident the sometimes effortless stroke that allowed Polanco to hit a career-high 23 home runs two years ago would return. That persistence paid off against the Brewers.

The 28-year-old turned on a Josh Lindblom offering in the fourth and sent it to the seats in right-center field to put the Pirates ahead to stay.

"I'm here for something," Polanco said. "I'm here because I can hit, I can play, I can play at this level, that's my mentality."

Pittsburgh collected 14 hits for the second straight day, including a season-best nine for extra bases. Adam Frazier and Jacob Stallings both homered and drove in three runs. Colin Moran doubled three times, and Erik Gonzalez chipped in a two-run double in the seventh as the Pirates batted around against Milwaukee's suddenly vulnerable bullpen.

"We kind of kept the foot on the gas tonight and continued to go and that's something that we haven't done as good a job of," Shelton said. "The last two nights it's been nice to see that we've gained some momentum and continued to carry it through at bat to at bat."

Derek Holland (1-1) surrendered one run in five innings in his 300th major league appearance. He allowed four hits in his first victory as a starter since April 9, 2019, for San Francisco. The charismatic left-hander also gave a postgame shoutout to his followers on the live-streaming service Twitch for their support.

Keston Hiura drilled a three-run homer in the seventh off Pittsburgh reliever Dovydas Neverauskas, pulling Milwaukee within three. The Pirates responded in the bottom of the inning by sending nine runners to the plate, highlighted by Gonzalez's big swing.

"We gave up 12 runs," Brewers manager Craig Counsell said. "There's not going to be many wins when you give up 12 runs."

Lindblom, signed as a free agent last December following five years in the Korean Baseball Organization, failed to make it through five innings for the third time in five starts. Lindblom (1-1) gave up three runs in four innings, nudging his ERA to 6.65 as Milwaukee lost for the fourth time in five games.

Asked his level of frustration after the Brewers - postseason qualifiers each of the last two years - fell to 11-14, Lindblom offered a blunt assessment.

"On a scale of 1 to 10, probably a 10," Lindblom said. "I don't want to speak for everybody, but I'd say there's not one guy in that clubhouse right now who isn't frustrated about something. Frustration is definitely the word right now, I'd say."

The Brewers designated veteran utility infielder Brock Holt for assignment after the former All-Star struggled to gain any traction at the plate. Hock hit just .100 (3 for 30) after signing a free agent deal with Milwaukee in February that included a club option for 2021.

"At this point we didn't feel like we were getting anywhere," Counsell said. "So we're going to try something different."

Milwaukee filled Holt's spot on the roster by recalling Jace Peterson. The Brewers are Peterson's fifth team. He hit .220 in 29 games with the Orioles in 2019.

Peterson entered in the eighth and grounded out in his only at-bat.

Pirates: Closer Keone Kela was re-examined after leaving five pitches into an appearance on Friday night due to right forearm tightness. The team will re-assess Kela's throwing status next week.

Brewers: RHP Corbin Burnes (0-0, 3.00 ERA) makes his sixth appearance and third start of the season in the series finale Sunday.

Pirates: Rookie RHP JT Brubaker (0-0, 4.91 ERA) will make his third big league start. Brubaker has yet to pitch more than three innings in any appearance this season.