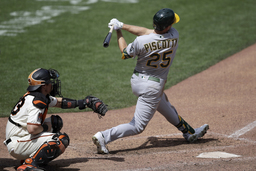 A little earlier than usual, too.

Pinder hit a go-ahead, two-run shot and Stephen Piscotty and Marcus Semien also homered during a nine-run burst in the fifth inning as the A's clobbered the San Francisco Giants 15-3 Sunday for their fourth straight win.

Piscotty matched his career high with five RBIs as the A's, with the best record in the AL, won for the 13th time in 15 games.

Pinder's pinch-hit homer made it 4-2. Mark Canha added a two-run triple, Piscotty launched a three-run homer and Semien hit a two-run drive for an 11-2 lead.

"It's been a fun two weeks, there's no doubt about that," Pinder said.

Pinder knocked his third career pinch-hit homer and first since Aug. 3, 2019, against St. Louis. Piscotty added a two-run double in the sixth.

The A's gave Mike Fiers (2-1) all the support he needed and then some in his fifth start and improved to 4-1 in his outings. He struck out four over six innings and allowed two runs on seven hits.

"Just got to keep rolling," manager Bob Melvin said. "When you're winning games and playing good you've got to get greedy and win as many as you can because you sometimes you don't go through winning streaks the entire season."

This one wasn't close after consecutive Oakland rallies for one-run victories - 8-7 in 10 innings Friday night following Piscotty's tying grand slam in the ninth, then Canha's go-ahead, three-run homer in a 7-6 win Saturday.

"It's awesome," Pinder said. "We don't have that feeling of down in the dugout. It doesn't feel like we're ever out of a game."

Right-hander Logan Webb (1-2) struck out five over 4 1/3 innings Sunday but was hurt by five walks.

Brandon Belt homered in the second for San Francisco in a steady rain after the Bay Area was hit with a rare thunderstorm overnight. Brandon Crawford connected in the seventh.

Donovan Solano went 0 for 5 and had his career-best 17-game hitting streak snapped as the Giants lost for the 11th time in 14 games. They have allowed 39 home runs - nine this series.

"It's at least as much a result of the very good hitters in the Oakland lineup that there were that many home runs hit in the series off of our bullpen as it was our bullpen scuffling," Giants manager Gabe Kapler said.

San Francisco allowed nine or more runs in an inning at home for the first time since Colorado's 13-run fifth on on May 5, 2016.

After his seven hits in 43 at-bats over his past 11 games all had been home runs, A's slugger Matt Olson had three singles.

Oakland added two more runs in the eighth and has now scored 17 of its last 33 runs in the seventh inning or later with 48 such runs for the season.

Out of the lineup against a righty starter, San Francisco's Pablo Sandoval snapped an 0-for-11 funk stretching his previous five games with a pinch-hit single in the sixth.

Athletics: RHP reliever Burch Smith went on the 10-day injured list as expected with a strained right forearm after he was forced to exit in the seventh inning Saturday night. "We're just trying to let it calm down right now," Melvin said, unsure of the timeline for Burch until after doctors read an MRI scheduled for Monday. ... Oakland recalled RHP James Kaprielian from its San Jose alternate site.

Giants: OF Austin Slater was available to hit or be used as a pinch-runner off the bench after he was limited to designated hitter duties Saturday. He had missed the two previous games with a strained right elbow. "He came out of yesterday's game feeling good. We don't have a throwing program in place for him yet that's something that we're working on," Kapler said. ... LHP Drew Smyly (sprained left index finger) threw out to 120 feet Saturday. ... OF Steven Duggar worked on baserunning and stealing bases at the alternate site in Sacramento.

RHP Chris Bassitt (2-0, 2.42 ERA) pitches the series opener at Arizona on Monday as the A's begin four straight vs. the Diamondbacks - two in Phoenix then a pair in Oakland. Kapler announced after the game Tyler Anderson (0-1, 3.63) would start Monday's game at the Angels.