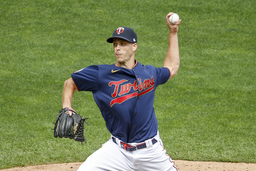 MINNEAPOLIS (AP) Nelson Cruz hit a two-run homer and the Minnesota Twins held on to beat the Kansas City Royals 4-2 in the first game of Saturday's doubleheader.

Tyler Duffey (1-0) earned the win with a perfect inning in relief of Jake Odorizzi. Taylor Rogers picked up his fifth save in six chances for Minnesota, which was swept in Kansas City last week.

Gabe Speier (0-1) surrendered one while getting two outs for the Royals. Ian Kennedy started and pitched two innings as the opener, his first start since Sept. 28, 2018.

"Going in today, it just went right back into that starter routine I've literally done my entire life," Kennedy said. "You have that routine for eight, nine years in big leagues. Last year, I had different routine. This year, I have a new routine."

Odorizzi was sharp early in his second start of the season following back trouble. He didn't allow a hit until Salvador Perez singled with two outs in the fourth and struck out six in the game.

"I felt much better today, much more stronger, more like myself," Odorizzi said. "So, that's encouraging. I've still got a little ways to go. Today was definitely a big step in the right direction."

His day unraveled quickly, though.

Ryan McBroom doubled into the right-field corner to start the fifth. The play was originally ruled foul but a video review showed the ball landed just inside the line as Max Kepler slid trying to make the catch. Kepler threw the ball into the empty stands after the foul call, but Kansas City challenged the play, and McBroom was awarded second base.

Maikel Franco followed with his fifth homer of the season, ending Odorizzi's day.

"It's tough because as a competitor I'm frustrated just because my last pitch today was the worst one at the worst time, and had the worst result," Odorizzi said.

Cruz continued to be the driving force behind the Twins' offense. He hit a long home run off the facing off the third deck in left field in the third for his fifth homer of the season and 406th of his career. Cruz is one home run behind Duke Snider for 56th all-time.

Cruz nearly added a second homer in the fifth. His line shot appeared ready to clear the wall, but left fielder Alex Gordon pulled the ball back before it flipped out of his glove and onto the grass for a double.

Saturday marked the first doubleheader of the season for Minnesota and the Royals after severe weather postponed Friday's series opener. All doubleheaders in Major League Baseball during this virus-shortened 60-game season are seven-inning games.

"First time I've played a seven-inning game since probably the minor leagues when you play a doubleheader," Kennedy said. "You kind of catch yourself, it's the fifth inning, you're facing the back end of the bullpen (it's time to get going)."

Royals: RHP Jake Junis was scheduled to follow Kennedy and be the game's primary pitcher, but he was shut down while warming up in the bullpen. The team announced that Junis had back spasms and low back discomfort.

Twins: 3B Josh Donaldson missed his 12th straight game with a strained calf and doesn't sound close to rejoining the team. Chief Baseball Officer Derek Falvey said Friday that the team is going to be careful in regard to Donaldson's injury. He's dealt with similar nagging injuries in the past.

The second game of the doubleheader will see LHP Danny Duffy (0-2, 5.12 ERA) taking the mound for Kansas City. RHP Jose Berrios (0-2, 5.31) pitches for Minnesota. Duffy will be making his 10th career start at Target Field, tied for the sixth-most of any opponent starter. Berrios gave up four runs in 5 1/3 innings in a loss at Kansas City last week.