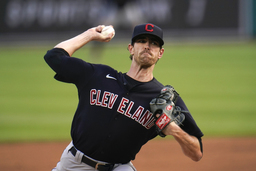 Cleveland's winning streak against one opponent is the longest since the Baltimore Orioles beat the Kansas City Royals 23 times in a row in 1969.

Bieber (4-0) allowed three hits and a walk and lowered his ERA to 1.30 in five starts this season.

"Talk about being on a roll," Indians manager Terry Francona said. "He has the ability to throw any pitch at any spot in any count, and I don't think I've seen another pitcher with a curveball and slider that are almost the identical speed with different breaks."

The All-Star Game MVP from last year has struck out a major league-leading 54 in only 34 2/3 innings this season.

"He can command all of his pitches and that's really tough," Jonathan Schoop said. "You've got to get him out of the game as soon as possible. I think he's better than last year."

Bieber fanned the side in the third and fourth and added two more in the fifth.

"I started locating my pitches better after the first couple innings," he said. "Sandy (Leon) and I got into a nice rhythm. I started to vary my curve ball and throw some sliders off that, and I could locate fastballs just to keep guys off the outside of the plate."

Nick Wittgren pitched a perfect eighth. JaCoby Jones made it 3-1 with a pinch-hit double in the ninth before Brad Hand finished for his fifth save.

"We still had our chance there at the end, which was kind of exciting," Tigers manager Ron Gardenhire said. "We had an opportunity to get to their closer and just missed a couple of balls."

"He was misfiring and just getting behind everybody," Gardenhire said. "He's got such good stuff that he never blew up, but he had ninety-something pitches in 4 2/3 innings."

Jose Ramirez hit a two-run double with the bases loaded in the Cleveland third. Franmil Reyes grounded into an inning-ending double play to help Turnbull escape without further damage.

"I was a little worried when we let them off the hook there," Francona said. "You don't want that to come back and cost you a ballgame, but Jose is doing a great job of giving us energy at the plate and on the bases."

Carlos Santana made it 3-0 with an RBI double in the fifth, finishing Turnbull.

Cleveland loaded the bases in the eighth with no one out, but Bryan Garcia got out of it with a popup, a strikeout and a flyball.

The Tigers placed RHP Ivan Nova (tricep tendinitis) on the 10-day injured list and recalled RHP Anthony Castro from their alternate training site. 1B C.J. Cron, who has been out since a knee injury earlier this week, announced he will undergo season-ending surgery.