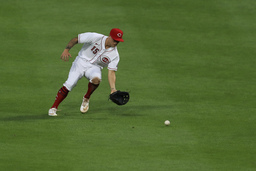 CINCINNATI (AP) Jesse Winker had his first career two homer game and Sonny Gray continued his torrid strikeout pace as the Cincinnati Reds broke open a close contest with five runs in the last two innings for an 8-1 win over the Pittsburgh Pirates on Friday night.

Relying primarily on his fastball, Gray (4-1) struck out 10, raising his season total to 45, a franchise record for a pitcher's first five appearances. Luis Castillo set the previous mark of 41 in 2019.

Gray bounced back from a subpar performance in his previous start, allowed five hits and one run - Bryan Reynolds' first homer and run batted in of the season - with one walk in 6 2-3 innings. That's after being roughed up for six hits and four runs in 5 1-3 innings in a 9-3 loss at Milwaukee.

"I actually thought we had pretty good at bats off him," Pittsburgh manager Derek Shelton said. "We ran his pitch count up, but he was able to get through the seventh, which was big for them because of where they are at with their bullpen.

"I was pleased with our approach because we ran him into counts and hit the balls hard right at people a couple times. We saw Sonny Gray pretty close to his best tonight."

Winker gave the Reds a 1-0 lead with an opposite-field homer starting off the second inning. His fourth home run of 2020 bounced about two rows deep off an advertising tarp stretched over seats in left field.

Reynolds tied the game with his booming shot to deep right-center field with two outs in the fourth.

Winker quickly responded, following Joey Votto's fourth-inning leadoff double with a no-doubt drive to right that landed in a tunnel leading to the concourse. Gregory Polanco barely moved as the ball sailed over his head.

Winker's extended his hitting streak to five games (11-for-16, .688). He has hit all five of his homers during the streak.

Both homers came against Chad Kuhl (0-1), who gave up four hits and three runs with one walk and six strikeouts in five innings.

"I was just trying to be competitive at the plate,' said Winker, who went 1-for-22 to open the season. "I was trying to stay consistent with my routine and put the bat on the ball. They got out, so I was happy with that."

Josh VanMeter led off the seventh with a double, went to third on Freddy Galvis's infield hit and scored as Tucker Barnhart forced Galvis at second. One out later, Shogo Akiyama singled to center and Castellanos smacked his eighth homer of the season to center field, where it barely cleared the fence, out of the reach of Cole Tucker's attempt at a leaping catch.

Galvis and Barnhart added back-to-back doubles in the eighth for Cincinnati's final run.

After catching VanMeter's fly ball one step in front of the right field wall, Polanco threw out Nick Senzel at second trying to advance from first. Polanco's throw reached shortstop Kevin Newman on one short hop.

Cincinnati 3B Eugenio Suarez, hitting just .123 going into the game, did not start. Kyle Farmer replaced Suarez in the lineup. Suarez has two home runs in 19 games after setting a record for Venezuela natives with 49 last season.

Before the game, the Reds promoted RHP Tyler Thornburg from their alternate training site and designated for assignment IF Christian Colon. Thornbug made his Cincinnati debut with two innings of spotless relief.

Reds: RHP Trevor Bauer (2-0) needs four strikeouts to set the franchise record for most by a pitcher over his first four starts of the set. Johnny Cueto set the mark in 2014 and it was tied this season by Gray.