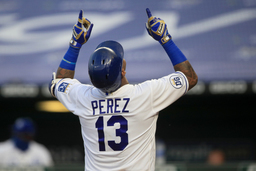 KANSAS CITY, Mo. (AP) One of these days, Royals manager Mike Matheny hopes to see Jorge Soler smile when he trots around the bases.

It didn't happen after either of Soler's two homers Saturday night.

Maybe if he didn't just miss on another one that was caught at the warning track.

The slugging outfielder's big power output included a three-run shot during ago-ahead six-run fourth inning, when Nicky Lopez and Salvador Perez also went deep, and helped to push Kansas City to a 9-6 victory over the Minnesota Twins that clinched its first winning series against the AL Central rivals since September 2018.

"It's my goal to get him to smile one time when he comes around. That has to be fun to be able to do that," said Matheny, whose club has won three straight on the heels of a six-game slide. "I'm sure he must be smiling on the inside."

Soler and Perez went back-to-back for the second time this season, and it was the first time the Royals hit three homers in an inning since Aug. 19, 2018, against the White Sox. Lopez's two-run shot came off Lewis Thorpe (0-1) and tied the game.

Tyler Zuber (1-1) earned the win in relief of Danny Duffy. Trevor Rosenthal got four outs for his second straight save.

"The bullpen once again came in and did a fantastic job for us," Matheny said, "but that inning where we give up four and we come right back and take six, that's special, and that sort of thing can carry a club for a while, knowing you have that kind of talent and that kind of ability. The three home runs are huge right there."

Nelson Cruz, Byron Buxton and Max Kepler went deep for the Twins, who lost the series opener in a 3-2 pitching duel.

This one was decided by the long ball.

Soler began the show with his homer leading off the third against former Royals pitcher Jake Odorizzi, who was making his season debut for Minnesota after dealing with a sore muscle in his ribs. That gave Kansas City a 2-0 lead.

The Twins answered with a pair of homers in the fourth. Cruz hit the first leading off, the ninth time the 40-year-old slugger has gone deep in his last 12 games against Kansas City. Buxton's three-run shot was the second, giving him homers in three consecutive games after a slow start to the season.

"To put up those runs, it was big inning for us," Twins manager Rocco Baldelli said. "It was a big moment the next half-inning when they put up some runs, too."

The Royals' big rally in the fourth began with a simple single by Maikel Franco, but Lopez immediately followed with his third career homer to tie the game. Brett Phillips and Whit Merrifield continued the charge with singles, and Soler added a three-run shot for his first multi-homer game since - coincidentally - facing the Twins last September.

Perez added his homer to cap the six-run inning. That's more than the Royals had scored in all but two games this season.

The Twins got a run back on Buxton's single in the sixth, and another when Kepler went deep in the seventh, before the Kansas City bullpen closed down the last two innings to raise the possibility of a series sweep.

"We decided to go out there and fight. We put a bunch of hits together," Soler said. "That was a big stand."

CF Nick Heath (strained left hamstring) was placed on the injured list and RHP Chance Adams recalled prior to the game. Heath hurt his hamstring on a stolen base attempt in the series opener Friday night.

Twins: 2B Luis Arraez (sore right knee) was back in the starting lineup after missing the past two games. ... 1B Miguel Sano started despite a sore right wrist. His glove was knocked off trying to tag a runner Friday night.

Royals: 1B Ryan O'Hearn fouled a pitch off his right shin in the fourth inning. He was checked by manager Mike Matheny and trainer Nick Kenney but stayed in the game until the fifth, when he was replaced by Franchy Cordero.

Royals RHP Brady Singer (0-1, 4.80 ERA) makes his fourth start and the first of his career at Kauffman Stadium when the rookie takes the hill in Sunday's series finale. The Twins counter with RHP Jose Berrios (1-1, 4.80), who allowed one run on four hits in six innings in a win Tuesday night in Pittsburgh.