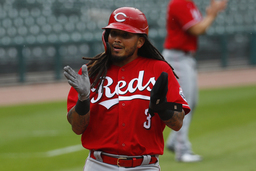 DETROIT (AP) Nick Castellanos, Tyler Alexander and the rest of the Reds and Tigers packed a lot of drama into seven innings.

At one point, Cincinnati starter Anthony DeSclafani forgot this game was supposed to be shorter.

"When the Tigers scored those three runs to tie the game in the sixth, I was thinking we still had three innings left to win the game," DeSclafani said. "I forgot we were only playing seven. I don't even remember the last time I played a seven-inning game."

In the opener of the first seven-inning doubleheader in Major League Baseball history, Shogo Akiyama hit an RBI single in the seventh that sent the Reds past Detroit 4-3 Sunday.

Castellanos homered twice and drove in three runs for Cincinnati against his former team. But his three-base error in right field with the bases loaded in the sixth allowed Detroit to tie the game.

Reliever Tyler Alexander had kept the Tigers in it by striking out the first nine batters he faced, tying the American League record for consecutive strikeouts. His streak ended in the top of the sixth, one short of Tom Seaver's major league record, when he hit Mike Moustakas with a 1-2 pitch. Moustakas left the game with a forearm injury.

MLB recently decided to use doubleheaders of seven-inning games, which have been commonplace in the minor leagues and colleges, to help teams alleviate an expected crush of twinbills caused by weather and coronavirus-related postponements. The Reds-Tigers game was rained out Saturday.

There was no seventh-inning stretch - or even fifth-inning break - in a game that took 2 hours, 25 minutes. The start of the game was delayed more than two hours because of rain.

The scoreboard at Comerica Park was still set to display a nine-inning game. After pitching five scoreless innings, DeSclafani watched from the clubhouse and momentarily forgot the game was only scheduled for seven.

It almost required extra innings. With the score tied and the new doubleheader rules in place, Tigers manager Ron Gardenhire brought in closer Joe Jimenez (0-1) to start the seventh.

Freddy Galvis led off with a double, took third on Tucker Barnhart's single and scored on Akiyama's bouncer through the drawn-in infield.

Raisel Iglesias (1-1) got the final out of the sixth before pitching a scoreless seventh. The Reds still don't have a save this season, and their bullpen couldn't hold on after DeSclafani left them a 3-0 lead.

Lucas Sims started the sixth and the Tigers loaded the bases with two out on a single, a walk and a hit batter. Victor Reyes lifted a fly ball to right-center. Castellanos called off center fielder Nick Senzel, but the ball bounced off the tip of his glove and all three runners scored.

The Reds took a quick 2-0 lead. Rony Garcia walked Akiyama to start the game, and Castellanos homered into the Cincinnati bullpen.

Castellanos homered again in the third inning. It was his second two-homer game at Comerica Park, the other coming on Aug. 22, 2017. Castellanos played his first 837 games with the Tigers before being traded to the Chicago Cubs last season.

Reds: Cincinnati activated DeSclafani (shoulder) from the 10-day injured list before the game and placed 1B Joey Votto on the short-term injured list.