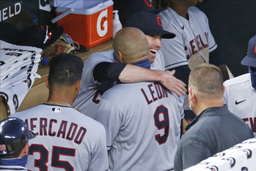 MINNEAPOLIS (AP) Cleveland's Shane Bieber tied the major league record for strikeouts in a pitcher's first two starts of the season, punching out 13 Minnesota Twins over eight innings in the Indians' 2-0 victory on Thursday night.

Bieber (2-0) fanned 14 over six scoreless innings on Friday against Kansas City. His 27 strikeouts in the two games matched the record set by Karl Spooner of the Brooklyn Dodgers in September 1954 during the first two starts of his short career.

"I've never been that much of a punch-out pitcher, especially coming up through the minors. The book on me was pitch to contact, this and that. I've made some adjustments the past couple years and started to see some swings and misses," Bieber said.

Facing a Twins team that came in with the second-best run differential in baseball, Bieber allowed three singles in his eight innings.

Cleveland's staff has been striking out hitters in bunches, part of a trend early in this pandemic-shortened season in which hitters are striking out more than ever and batting averages are plummeting. The Indians (5-2) have had four starts with 10 or more strikeouts. Their pitchers have also gone six-plus innings in every game - a solid formula for any season, but especially in a 60-game sprint.

"Obviously we're trying to put up zeroes and get the `W' first and foremost," Bieber said. "But if you get some strikeouts while you're at it, that's always fun too."

Francisco Lindor supplied all the offense Cleveland needed with a two-run homer in the third inning off Jose Berrios (0-1). After Jose Ramirez singled with two outs, Berrios left an 0-2 pitch up over the plate, and Lindor drove it over the fence in right for his second homer of the season.

Bieber got swinging strikeouts of Miguel Sano and Buxton to end his 102-pitch night. James Karinchak retired the side on six pitches in the ninth for his first career save.

Minnesota's biggest threat against Bieber came in the sixth when Byron Buxton and Max Kepler hit one-out singles. But Bieber struck out Josh Donaldson for the third time in the game and Jorge Polanco flied out to the warning track.

"He's had two starts so far this season," Donaldson said. "I'm not trying to give him the Cy Young (Award) just now. But in those two starts he's had elite command."

Bieber did not walk a batter. He walked one in his first start.

"It was very fun to catch," Sandy Leon said. "Any pitch, any count. When you have a guy like that on the mound, it's really fun to have a game plan."

The major league record for strikeouts in two consecutive games is 33 by the Cubs' Kerry Wood in 1998. Bieber surpassed Nolan Ryan's AL record (25) for the most in a pitcher's first two starts of a season.

"That's amazing company to be even in the same sentence with," Bieber said.

Spooner, the man whose record Bieber tied, never matched the promise of his 1954 debut, when he threw two shutouts in the final week of the season. He returned in 1955 but was plagued by arm troubles and retired at the end of the year with a career record of 10-6.

Minnesota committed its first error of the season on a wild throw by first baseman Sano in the sixth inning. The Twins came into the game as the only team in the majors without an error.

Indians: RF Domingo Santana was hit on the hand by a pitch in the second inning and was briefly looked at by a trainer but remained in the game. Santana was replaced by pinch-runner Greg Allen in the sixth.

Twins: RHP Jake Odorizzi, currently on the injured list with a right intercostal strain, threw a bullpen Thursday. Odorizzi said he is pain-free and has been for "a couple days." He'll face live batters on Monday.

Indians: RHP Mike Clevinger (0-0, 2.57 ERA) takes the mound Friday in the second game of the four-game series. He struck out six and gave up two runs in a no-decision in his first start of the season against Kansas City.

Twins: RHP Randy Dobnak (0-1, 2.25 ERA) will make his seventh career start after debuting last season. Dobnak was tagged with a loss in his season debut after allowing one run in four innings against the White Sox.