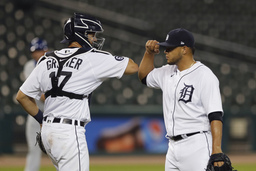 DETROIT (AP) JaCoby Jones hit a tiebreaking solo homer in the seventh inning, and Detroit's bullpen came through again in a 5-4 victory over the Kansas City Royals on Wednesday night.

A night after pitching six scoreless innings in a win over the Royals, the Tigers' relievers held Kansas City without a baserunner for four. Detroit rallied from a 4-0 deficit thanks in large part to Jones, who doubled twice before connecting off Ian Kennedy (0-1) for his third homer of the year.

"Obviously, it felt great," Jones said. "We were battling. Our pitching staff kept us in the game. They were grinding, getting outs."

Bryan Garcia (1-0) earned his first big league win, one of four Detroit relievers who pitched in the game. Joe Jimenez worked the ninth for his fourth save.

"Bryan was fantastic tonight," manager Ron Gardenhire said. "Came in and the ball was really jumping out of his hand."

Danny Duffy allowed only three hits in five innings for the Royals, but one of them was Schoop's two-run shot in the fifth, which barely made it past a leaping Merrifield at the wall in right and tied the game at 4. Duffy struck out eight with one walk.

Merrifield is now 22 for 42 against Detroit's Matthew Boyd after going 2 for 3 against him Wednesday. He led off the game with a double and scored on Franco's two-base hit. Merrifield also singled to start the third and scored on a single by Franco. Ryan McBroom's RBI single made it 4-0 in the third.

Detroit chipped away with sacrifice flies by Schoop in the third and Niko Goodrum in the fifth. Then Schoop went deep to tie it.

The Tigers have homered in every game so far this season after finishing last in the AL in that category in 2019.

Boyd allowed four runs and nine hits in five innings for Detroit. He struck out six.

Jones was hit up high by a pitch in Tuesday's game. He was able to keep playing but still wasn't pleased a day later.

Adalberto Mondesi was 2 for 21 on the season coming into the game - and made a baserunning blunder in the ninth inning Tuesday night. The Royals dropped him from third to sixth in the batting order Wednesday, and he tripled in the second and scored on Bubba Starling's sacrifice fly.